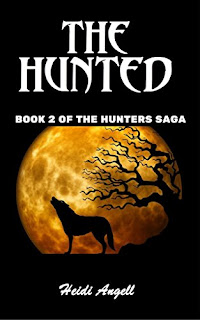 The Hunted starts where The Hunters ended. Fury, the Immortal, and Havoc and Screvin, the Weres, are searching for the Were girl who turned Screvin. Fury still wants to hunt vampires, but is going along for the time being while Havoc teaches Screvin how to deal with his new status.
They finally catch up with Avie the Were girl and persuade her to join them despite Screvin's mistrust of the girl. Havoc works with the two new Weres, teaching them to meditate and get ready for the change that will happen at the next Full moon.
It becomes clear that someone else is still pursuing them, and hampered by the two newbies, Fury and Havoc decide to try and escape the hunters.
There's a lot of fighting and good battle scenes here. I liked how Screvin had to learn to deal with his growing feelings for Avie. I also like Avie and the mystery around her was intriguing. I read this as an ARC from the author so there were a lot of grammatical errors, but I'm sure they were fixed before publication. Warning: there's a cliffhanger ending which is something that annoys me, but other readers probably won't mind. I gave this 3 and 1/2 stars and I want to thank Ms. Angell for allowing me to continue the adventure from The Hunters.


Link to Amazon
Posted by AntrimCycle at Friday, February 17, 2017