Book Review: The Impossible Art of Falling by Sara Fiorenzo

Jena Grayson is an 'eventer' in the world of horse training, someone who rides to take jumps. The 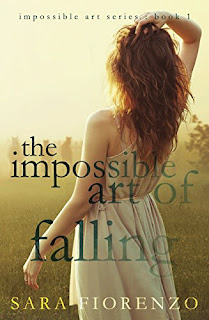 author's note mentions a little more about Three-Day eventing, but as someone who is not a horse person, I had to make a guess as to what this sport is about; that took away some from the story.
The death of her father in a fall from a jump gone wrong sends her world into a tailspin. Her mother just leaves (this was explained near the end of the book, but it never made much sense to me), so Jena goes to live with her uncle and aunt on their horse farm after a year has passed.
Luke lives and works at the farm where the aunt and uncle have taken in him because of the tragedy in his own life. A fairly predictable whirlwind romance occurs between Luke and Jena as they share their tragedies.
I wanted to like this book more than I did. The bits about the horses were interesting though it was more about trail-riding and grooming. There seemed to be some time jumps that I didn't understand. Why Jena still rode after her father's death, then stopped and wouldn't ride again didn't make sense to me. Why it took a year for the uncle to come get her and why her mother left also didn't make sense. There was a lot of drama that seemed to be fairly easily resolved; conflict in a story is good, but it has to be believable (Tyler and Luke).
There is also a lot of 'tellling' in this book. Some of it is beautifully written, but too much slowed the story down. I'd love to read a book about eventing, one that focused on what happens at an event and what the sport really entails. This book was just okay for me.

Link to Amazon
Posted by AntrimCycle at Monday, August 29, 2016