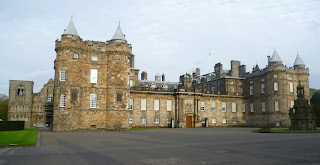 Holyrood Palace in Edinburgh sits at the bottom of the Royal Mile at the opposite end from Edinburgh Castle. Icarus and Eve visit the Palace in search of clues for the quest that Zeus has assigned them.
The Palace was originally a monastery in the 12th century and the ruins of that structure still remain on the back side of the Palace. Queen Elizabeth and the royal family maintain apartments still in the Palace, but the older part of the structure is open to the public. 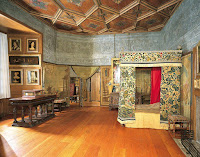 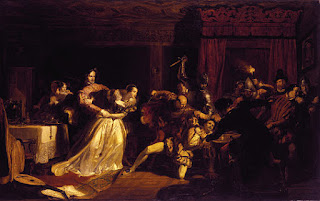 The apartments that Mary Stuart used are still in existence. A blood-stained mark shows on the floor, supposedly left by David Rizzio who was stabbed 56 times by her Mary's husband, Lord Darnley, who was jealous of the Italian secretary's influence on her. 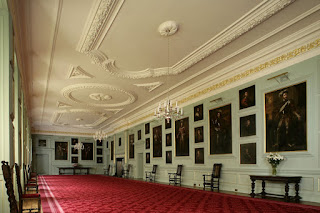 My favorite room is the Great Gallery. The Gallery is the largest room in the Palace, and is best known for the extensive series of portraits of the Scottish monarchs that line the walls. These were commissioned by Charles II from the Dutch painter, Jacob de Wet, and delivered between 1684 and 1686. They feature every king of Scotland, real and legendary, back to the supposed founder of Scotland, Fergus I, in 330BC, and were a clear message about the lineage of the Stuart kings, mostly that they all had large noses as did Charles II.
Posted by AntrimCycle at Monday, August 22, 2016