Thank you very much for letting me take over your blog today to reveal the cover for my latest novel, Dragon Moon.

This is a Teen & Young Adult Fantasy, and I hope to publish with Amazon’s Kindle Scout program.

The story concerns Scarlett, an almost nineteen year old who is undecided about her future. Throughout her school life she has been the subject of ridicule and bullying because of her flame, red hair. While college was easier, because she stood up for herself, she can’t make up her mind if University is the place she wants to be, and is taking some time out from studying to decide. She visits the Nottingham Goose Fair, and meets Dizelli, a psychic, who gives her a gold pendant and instructs her to wear it to bed. Scarlett wakes up the next morning but she’s not in her bed, or her home. She’s in a field. In her pajama’s. Her adventure begins and she’s thrown into a world of dragons and magic. She’s the Dragon Mage, and it’s her responsibility to save the dragons from slaughter, and also bring two warring tribes together. There are just a few days left before the Dragon Moon arrives. All the dragons currently asleep, protecting their eggs could die unless Scarlett finds a way to unite the silver haired, and black haired races together and to stop Lord Ithel from killing the elder dragon who knows the secret location of the dragon eggs.


No matter what Elyan’s surprise is, at least it’s another lovely day out. The sun is shining and despite the cool breeze, it’s perfect for riding. We set off at a walk but once outside the city walls, Elyan kicks his horse and he’s off. I have a hard time keeping up on Sootli; bless her. Once he reaches the foothills, he slows and when I catch up to him, he pulls off to the left instead of the path through the mountain. 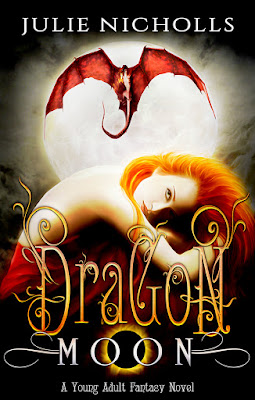 
Elyan pushes up and pulls me with him. “You will show us how to make a start. Will you not?”

Thank you for taking the time to read the sneaky peek... you can read another on my official website www.julienicholls.com to the page, Dragon Moon where a link will be added once the book is available for purchase.
Posted by AntrimCycle at Monday, August 22, 2016