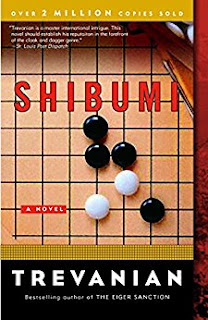 I've read this book a few times and I only wish I could give it more stars. Each time I find more interesting and thoughtful aspects to the story. Nicolai Hel is a man of no citizenship who speaks multiple languages. He tries to achieve shibumi (a particular aesthetic of simple, subtle, and unobtrusive beauty) in all aspects of his life. He is a professional assassin and is proficient in Naked-Kill. He is a master at the Japanese game of Goo (or Go, as we might call it) and pursues his hobby of caving in mountains around the world, especially in the Basque region where he now lives.
He is, as his friend the Gnome describes him a culturally Japanese medieval anti-hero:
"Only in Japan was the classical moment simultaneous with the medieval. In the West, philosophy, art, political and social ideal, all are identified with periods before or after the medieval moment, the single exception being that glorious stone bridge to God, the cathedral. Only in Japan was the feudal moment also the philosophic moment. We of the West are comfortable with the image of the warrior priest, or the warrior scientist, even the warrior industrialist. But the warrior philosopher? No, that concept irrirtate our sense of propriety. We speak of 'death and violence' as though they were two manifiestations of the same impulse. In fact, death is the very opposite of violence, which is always concerned with the struggle for life. Our philosophy is focused on managing life; yours on managing death. We seek comprehension; you seek dignity. We learn how to grasp; you learn how to let go. Even the label 'philosopher' is misleading, as our philosophers have always been animated by the urge to share (indeed, inflict) their insights; while your lot are content (perhaps selfishly) to make your separate and private peace."
Trevanian writes what are labeled 'thrillers'; his best-known work is "The Eiger Sanction" which was made into a movie with Clint Eastwood. However, while there are spies and action in his stories, there is also much more: ideas, philosophies, different worldviews not always comfortable or compatible with American values. I believe that reading Shibumi stretches the reader's mind in ways far beyond a simple thriller.
The writing is also superb. The author is able to portray each culture with all its strengths and weaknesses. In Shibumi, he covers Japanese, American, and Basque mostly though most Western countries, as well as Russia and China, are treated with his acerbic wit and descriptive dialogue.
The book was written a while ago and takes place from World War II to the 70-80s, but I've found it holds up well in rereads. The computer stuff isn't too dated, certainly not enough to take away from the enjoyment of the book. I noticed in the reviews that most people have reread the book several times; it's that kind of book. I expect that sometime in the future, I'll pull it down off my shelf and read it once more.


Link to Amazon
Posted by AntrimCycle at Saturday, July 21, 2018