Charles Stewart Parnell is an Irish hero, a preeminent political warrior who sparred with politicians 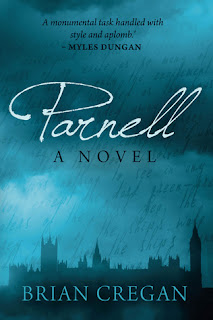 like Disraeli and Gladstone. This story of his life is narrated by his secretary and friend, James Harrison, and deals with his political exploits in the House of Commons where he fought to bring Home Rule to the Irish.
Parnell came from a wealthy landowner family in Ireland (his mother was American) and he was not like others of his class. He entered politics at the age of twenty-nine. He wasn't a fiery speaker, possibly not even a great one when speeches defined a politician, but he was resolute to the point of obduracy and knew how to wield Parliamentary rules to his benefit. He managed to obstruct Parliament until he got some of what he wanted for Ireland, despite being jailed by his political enemies. And then he lost it all because of his love for a woman.
I found the details of the politics fascinating, especially as how it relates to our current political situation. In a way, Parnell was the Mitch McConnell of his time, using Parliamentary rules and customs when he could and ramming other bills through when nothing else worked. He ruled his Home Rule party with an iron fist which ultimately led to his downfall when he couldn't concede he was in the wrong about his adulterous affair.
I learned a lot from reading this book, but two things stand out: one of the chief architects of Parnell's downfall was Joseph Chamberlain, father of Neville, and the word boycott comes from a technique used by the Irish Land League against a landlord who was evicting his tenants, a Captain Boycott who subsequently lent his name to history.
Regardless, Parnell is an Irish hero. By the way, I've been to see Parnell's cell in Kilmainham Gaol and his grave, which rests in Glasnevin Cemetery on a cholera pit holding thousands of Irish victims and is marked merely by a boulder with only Parnell inscribed upon it. (If you're in Dublin, take the tours of Kilmainham Gaol and Glasnevin Cemetery; they're both fabulous). Parnell died young at age forty-five, worn out by the seven months in jail and his arduous efforts on behalf of the Irish people. His funeral was attended by over 200,000 people.
Gladstone described him: "Parnell was the most remarkable man I ever met. I do not say the ablest man; I say the most remarkable and the most interesting. He was an intellectual phenomenon." Liberal leader H. H. Asquith called him one of the three or four greatest men of the 19th century, while Lord Haldane described him as the strongest man the House of Commons had seen in 150 years. Historian A. J. P. Taylor says, "More than any other man he gave Ireland the sense of being an independent nation."