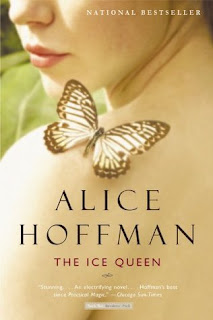 I always think I've read all the books by my favorite authors but every once in a while a book by Alice Hoffman or Anne Tyler or Mary Balogh shows up from their back catalog that I've never seen before. The Ice Queen is one of those books, and a lovely story it is.

The protagonist loves books, especially fairy tales (Grimm, not Andersen), so when her mother leaves for a party, this eight-year-old girl makes a wish and her mother dies in an accident. Later, the girl's grandmother is the recipient of another wish. As a young woman, our unnamed heroine makes a third wish and is struck by lightning.

These circumstances cause her to believe she is unworthy of love:

“At night I told myself a story, wordless, inside my head, one I liked far better than those in my books. The girl in my story was treated cruelly, by fate, by her family, even by the weather. Her feet bled from the stony paths; her hair was plucked from her head by blackbirds. She went from house to house, looking for refuge. Not a single neighbor answered his door, and so one day the girl gave up speaking. She lived on the side of a mountain where every day was snowy. She stood outside without a roof, without shelter; before long she was made of ice—her flesh, her bones, her blood. She looked like a diamond; it was possible to spy her from miles away. She was so beautiful now that everyone wanted her: people came to talk to her, but she wouldn’t answer. Birds lit on her shoulder; she didn’t bother to chase them away. She didn’t have to. If they took a single peck, their beaks would break in two. Nothing could hurt her anymore. After a while, she became invisible, queen of the ice. Silence was her language, and her heart had turned a perfect pale silver color. It was so hard nothing could shatter it. Not even stones.”

This is a dark story just like the Grimm fairy tales our heroine loves. It is also a story of opposites: life and death, ice and fire, dark and light, fairy tales and chaos theory. There's a lot of symbolism and touches of magic. But it's also a story of redemption and sibling love. I loved this book. It's definitely one to reread.