Icarus Rising is now on PreOrder at Amazon, B&N, Kobo, iBooks, and Smashwords. You can find the link to them all here: 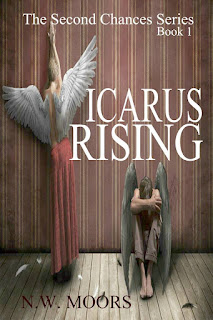 After his fall to Earth, Icarus has been in Hell, punished for his hubris. When he wins a chance at parole, he's thrilled - except for the set of wings attached to his body. Eve Gregory runs a small bookstore in northern Connecticut. When she hires the handsome stranger to work for her, she doesn't know the secrets he's hiding. Or that becoming involved with him will embroil her with the Greek gods and goddesses. Icarus and Eve must perform a quest set down for them by Zeus. If they are successful, will that be end of their relationship? Or will love teach them a new way to soar?
Posted by AntrimCycle at Thursday, August 18, 2016