Skylark was my favorite Indie book read of last year. The sweeping journey of Evan and Billie 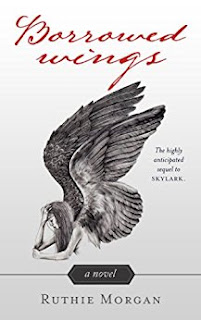 Skylark from Paris to Scotland to tiny St. Cloud in the Pacific is lovely, poetic, and gut-wrenching. Therefore, I was extremely excited to see that the sequel, Borrowed Wings, was released this month.
Borrowed Wings continues where Skylark left off. Billie is back in Scotland with her twin toddlers, Sunny and Evie, grieving for all that went wrong in St. Cloud. She misses the friends she made there, especially Jack, her neighbor who was always a solid presence in her life when Evan couldn't support her and the children.
The people in St. Cloud also has their stories. Jack is dealing with his family: his mother has senility issues, there is an ongoing dispute with his father, his oldest brother Saul is trying to deal with their parents and his wife's pregnancy, and his other brother, Raife, is an ongoing grief and sorrow in Jack's life.
Jed and Sadie have secrets, Zoe and Felix are expecting, and Dan is struggling with his place at the core of the islander's lives.
The story is told in multiple POVs: Billie is first person and the rest of the people in St. Cloud in third person. It jumps around but always in a linear fashion that moves the story forward. It is a beautifully written story, one to be savored and slowly digested. I'm a fast reader, but I took my time with this book, dreading the coming ending just as Billie does in the story with The Grapes of Wrath. There is a lot to ponder here.
Ms. Morgan covers diverse topics such as motherhood, grief, aging parents, friendships, and sibling feuds and weaves the strands into the story effortlessly. The ultimate question of the book is one Billie asks herself throughout the book: "Do I deserve two great loves in one short lifetime? Is there room in my packed heart for the love Jack deserves when Evan will always rest there? " Billie yearns for Jack but doesn't want to make the same mistakes that she made with Evan. Jack himself must resolve his family issues before he can move on with Billie.
Borrowed Wings is one of those stories that stay with you for a while, coming back at odd moments as something in your life reminds you of a paragraph in the book. Because isn't life all about love after all? 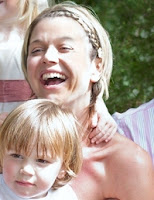 Ruthie Morgan lives and writes near the beach in New Zealand’s South Island with her husband and four children. Her debut novel Skylark was shortlisted for the UK Impress Prize 2015, placed as finalist in the Readers Favorite Awards 2015, won the Drunken Druid Book of the Year Award 2014 and was nominated for the B.R.A.G. Medallion.

blurb: “When he asked me to forgive him for everything I thought I could. I said yes and I meant it. But I didn't realise that night, everything was what he’d take away.”
When Billie May Worthington falls for Evan Skylark she believes she’d do anything, be anything and give everything for him. But can she forgive him when he asks for her world?
Everything twenty one year old Billie knows about life, love, beauty and art are challenged after graduation when she meets Evan, an enigmatic Irish artist with a dark side. Suddenly immersed in Evan’s intense world of artistic brilliance, flying sculptures and sexual obsession, Billie’s carefully planned future is quickly unrecognisable. Spanning London, Paris, Scotland and finally St. Cloud, the South Pacific island they make their home, the young couple chase Evans dreams and run from their past.
But what happens to young obsessive love when unplanned pregnancy reshapes the future? As Billie struggles to cope with the demands of motherhood Evan is forced to deal with the repercussions of a previous mistake that rock their world altering the future forever.
Emotionally gripping and darkly humorous Skylark is an unconventional love story. A novel about what we do for love, of beauty in imperfection, betrayal and the weight of obsession.
Posted by AntrimCycle at Sunday, August 28, 2016