Blog Tour: The Cove by Julie Spencer and Book Review 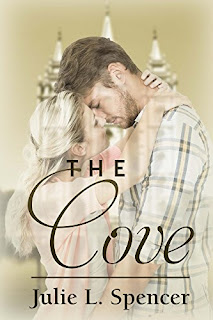 Some accomplishments are easier than others…

For Olympic swimmer Gail Pederson, gold medals came easy. Finding true love and marrying him in the temple? Not so easy.

Especially with three men competing for her attention, and temptations leading her further and further from her goal.

Choices have consequences, and each choice Gail makes affects all four of them. One choice changes their lives forever, and leaves unexpected consequences in its wake.

Gail may choose how to live her life, but she can’t choose the consequences.


Book Review
I admit that LDS romance is not a genre I'm familiar with, but romance is romance so I gave this a try. The book is well-written with vivid descriptions and interesting characters.
Gail Pederson is an Olympic swimmer from a wealthy family in the Midwest. At the beginning of the story, she becomes engaged to Stephan, a fellow student who she's been dating a few months. Meanwhile, she's still writing to Patrick, her childhood sweetheart who is away on mission in the Philippines.  She takes her confusion over these two men to a third man, Todd, Patrick's best friend who lives across the cove from her.
I found Gail somewhat frustrating. She's pretty shallow and callous about these men's' feelings. You can see who she's going to end up with from the start, though how she gets there is a surprise. Her self-centered attitude was a big turnoff for me actually, but the story and the men, especially Todd, give the book some depth.
This is a good clean romance. It helps to have some knowledge of LDS customs to understand everything that's going on, but it's not essential for the love story.

Biography
Julie L. Spencer lives in the central Michigan area with her husband and teenagers. She has a very full life

managing a conservation district office, writing grant proposals & book reviews, and chasing after several teenage athletes. Julie’s been writing since she was in junior high, but prior to publishing The Cove, her only published work was her Master’s Thesis. She loves to read and write New Adult Contemporary Christian Romance novels, and has several more novels nearing publication.