The first book in my new series, Icarus Rising, will be coming out soon. Icarus, who flew too near the sun and fell to Earth, is given a second chance at life by Zeus. He and Eve, owner of the bookstore where he ends up working, end up doing some traveling for a quest. 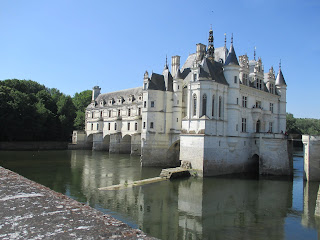 The first place they visit is the Chateau de Chenonceau, a lovely estate in the Loire Valley of France. The current Chateau was built in the early 16th century and extends over the River Cher. 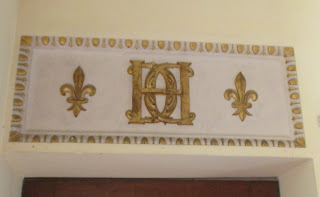 The original owners defaulted to King Francis I when they couldn't pay their debts to the crown. In turn, his son, Henry II, gifted it to his mistress, Diane de Poitiers. You can still see many Greek mythological themes derived from Diana's name (after the Roman name for Athena). After the king's death, his wife, Catherine de Medici, forced Diana to give her the chateau and made many improvements. She also tried to stamp out her rival's presence, but you can still see intertwined letters of D, H, and C representing the husband, wife, and mistress. 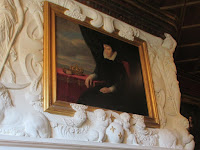 This is the period I used to represent Icarus and Eve's quest in Icarus Rising. This picture of Catherine de Medici features as a clue in the story.
The Five Queens’ bedroom is named in memory of Catherine dé Medici’s daughters, Queen Margaret

(married Henry of Navarre in 1572, who became King Henry VI in 1589, she agreed to have the marriage annulled in 1599) and Elisabeth of France (wife of Phillip II of Spain), her daughter-in-laws, Mary Stuart, Queen of Scots (wife of King François II), Elisabeth of Austria (wife of King Charles IX) and Louise of Lorraine (wife of King Henry III). All stayed here at one time during Catherine's lifetime.