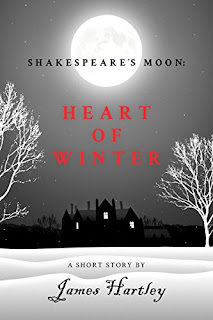 Heart of Winter is a short story that is also the prequel to a new series called  Shakespeare's Moon. This takes place during World War II outside of London. A young girl, Enid, has been found wandering down a bombed street and taken in by an elderly couple. They decide to enroll her in boarding school where she'll be safer. St. Francis de Sales School is also being used as a hospital as Enid arrives.
Almost immediately odd happenings occur and Enid is at the center of them. This is a dark story with a Gothic feel. The headmaster, Mr. Dedalus, is eccentric but appealing. Enid is a bit of a brat at the beginning of the story, but I found that she grew on me as the story progressed.
The next book in the series is based on Macbeth. Each book will be based on a different Shakespeare play and takes place at St. Francis which is an excellent premise. I'll look forward to reading it.

Link to Amazon
Posted by AntrimCycle at Wednesday, October 26, 2016