The Grey Eyed Storm: The Occuli, Book One (The Occuli Book Series 1) by Christie Stenzel 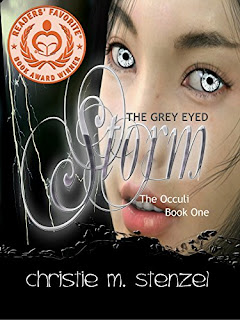 A captivating, supernatural fantasy novel about a race of people with magical powers depending on the color of their eyes, who are fighting for their very survival against evil forces that want to extinguish them and take their powers and their land for themselves!

Imagine the shock of being eighteen year old Remy Verbetta and finding out that you are not only not "human", but also are not from this “world”.  Remy’s life is turned upside down when she suddenly finds out her entire life has been a lie.  Another “world” is living and breathing along-side our own, a kind of alternate dimension.  On her eighteenth birthday, Remy finds out that she is not “human”, but rather a member of an ancient and almost extinct race called the Occuli.  Each Occuli has different magical powers based solely their eye color.

A multiple award-winning supernatural, fantasy novel, The Grey Eyed Storm: The Occuli, Book One, follows Remy on a journey of self-discovery, magic, mystery, romance and betrayal, as she tries to figure out a way to not only survive, but also find a way back to her true home and save the Occuli from extinction!

Writing and reading are my passions!  My dream to be a writer began, when as a five year old child I would ask my mother to write down the stories I would make up about talking dogs.

Since growing up and becoming further educated with a Bachelor's Degree in English (I have an affinity for classic literature), a Master's Degree in Leadership, and a degree in ultrasound, I have begun to pursue that dream in hopes of one day making it my career.  I have many interests and ideas so my ultimate goal is to release works of fiction in multiple genres.  Fantasy will always be my first love however, as I have always had an intense imagination that threatens to inundate me if not expelled onto paper.

I currently have five published books: an ongoing fantasy series with three installments so far (the fourth book is coming in December 2016), a fantasy short story, and a suspense/thriller short story.  The first book in my fantasy series, The Grey Eyed Storm: The Occuli, Book One, has now won multiple awards which is very exciting.  Aside from writing, I enjoy physical activities like running and yoga.  I am blessed to have an amazing family, close friends and two beloved canine companions.