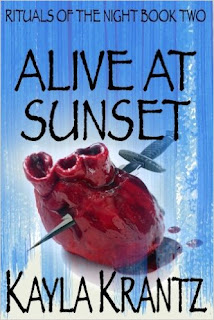 Alive at Sunset is the second book in the Rituals of the Night YA Paranormal series. Luna has lived through the terror and death of Dead by Morning (Book 1) and has just finished up a semester at her college. Three years have passed since the events that occurred in high school and Luna, while still a loner and overachiever, has a new roommate, Amanda, and is trying to move on.
Her nemesis, Chance, is still in a coma though Luna's friend Max tries to warn her that something is wrong and changes are coming. Luna tries to ignore him, but when things start to go wrong in her life, there can only be one person responsible.
I enjoyed the story. It's a good follow-up to the events of Dead by Morning. Some issues are resolved from the first book and Chance comes across as a much more sympathetic figure (if you can believe it). I found the first part a little slow, but then the action picks up and doesn't stop.
I'm looking forward to the next book in the series to see what's next for Luna. I received this as an ARC in exchange for an honest review.


Link to Amazon
Posted by AntrimCycle at Wednesday, October 05, 2016