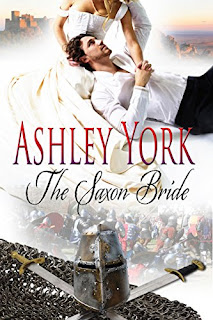 John is a Norman who is given a young Saxon bride by William the Conqueror. Rowena's family has been destroyed by the Norman invasion of England and she is unprepared to marry the Norman knight, no matter how handsome he is. John leaves right after the ceremony to fight for his king for the next three years, leaving his virgin bride behind.
John finally shows back up to do his duty, but Rowena is unhappy. Meanwhile, John must win over the conquered Saxons and appease his bride. There are a lot of misunderstandings before all is resolved.
The story is well-written and I enjoy books set in this period. And while it is true that knights were often away for long periods of time in this era, I found it made me wonder just how in love John and Rowena could actually be. They spent very little time together to actually get to know each other. It made the lust understandable, but I would have liked to have seen more actual dialogue between the two main characters.
I would rate this 3 1/2 stars because of that, but this is still a good story and I'll read more in the series.