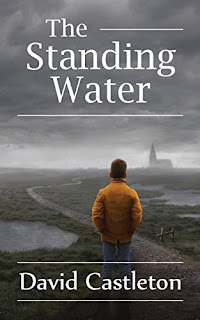 Ryan Watson is a young schoolboy, age six or seven, attending school in , an economically depressed community in Yorkshire. It's a conservative area where corporal punishment is still the norm and adults mutter about liberals and their negative impact on society.  Mr. Weirton is the headmaster at the school and he delights in handing out the 'six and a few more for luck.'
There's a mystery about a stagnant pond where supposedly a former schoolmate perhaps drown and some bones of a girl named Lucy that Weirton likes to display to horrify the students. Ryan and his friend Jonathan are some of the brighter children, and they use their imaginations and local folklore to while away the time between whackings.
Because there are a lot of whackings, all described as both the punisher and the victim lose their breath as . This is an unremittingly grim story as Weirton gradually loses his grip on reality. in Ryan's POV though diary entries from Weirton give his side of the story.
Mostly it's an unremitting cycle of abuse that destroys any real initiative a child might show real redemption. It's gothic in the of Jane Eyre and her time at School with punishments and terror inflicted on the students.
The author is an excellent writer. He describes the gloomy atmosphere in and the history of the area well and makes it interesting. I also liked a later section that takes place in Scotland. Ryan and Jonathan are compelling characters and the author captures these two young imaginative boys well. Everyone else is cardboard cutouts of miserable human beings who don't seem to want to change their lives. Even Weirton who longs for freedom from his family and job can't seem to diverge from the path he's chosen until forced to by circumstances.
I found the first part of the book slow and repetitive; we get the detailed descriptions of the pain the victims suffer and the ecstasy of Weirton during countless whackings. It picks up after a visit to a neighboring church and the events that take place there. Honestly, I never felt horror in the gothic sense; it's obvious that the witch's hand, Marcus's pond, the drummer boy, and other dreadful legends are from the vivid imaginations of the boys. The horror comes from the constant abuse, both from the adults and among the children who feed on the dark environment around them. This is a grim and depressing story, and the ending doesn't redeem it.