Book Review: Two Like Me and You by Chad Alan Gibbs 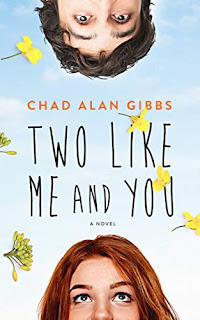 Be warned: I gush here. This is one of the funniest books I've read in a while. It's also a tender sweet story. If you like YA, you need to read this book now!
Edwin Green is a high school junior and a bit of a nerd. He's been in a funk since his girlfriend dumped him a year ago on Black Saturday because she suddenly became famous. When he's paired up with new girl Parker Haddaway for a history assignment, he what he in for. As Edwin says about himself:
"I was a cautious teenager. And caution, if it is a virtue, is not one often associated with teenage boys. On the whole, we make rash decisions without giving much thought to the consequences, either intended or unintended."
Anyway, Edwin and Parker end up taking Garland Lenox, a ninety-year-old WWII veteran, out of his nursing home and taking him to France to find his lost love. Garland is a character; he tells Edwin stories about his past life - he says he was some secret agent - that are frankly unbelievable - maybe.
One of this story is the 'virtue' of fame in today's world. Edwin thinks he might win his ex-girlfriend back if he also becomes famous, and this trip to France might just do that. Parker is mysterious with a complicated backstory, but she and Garland are good friends. She's very kind-hearted also funny. She's been through a lot and is older than her years. Parker -
“The world is a stage, Edwin Green, but the play is badly cast.”
Garland is the glue of the book. He's gruff with a heart of gold. He's also having the time of his life running around France with the two teenagers, causing mayhem and international incidents. they find Madeleine, Garland takes advantage of this adventure for a last hurrah.
The author is a good writer. The pacing of the story is excellent, and I especially like the little chapter headings that foreshadow what's coming next. He does a great job in describing Normandy; the scene of Edwin and Parker in the canola field is perfect, and he adds in other little historical touches that make it clear he knows the area well.
It's a fabulous book and one that will stick with you for a while. I look forward to more from this author.

Email ThisBlogThis!Share to TwitterShare to FacebookShare to Pinterest
Labels: book reviews, chad alan gibbs, Two like me and you