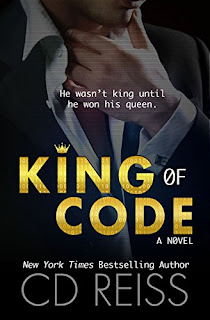 Taylor Harden is an ex-hacker who is on the cusp (yes, I used cusp - you'll get it if you read the book) of fame and fortune with his new unhackable system. Until, just as Wired is interviewing him, all his screens go black. His unhackable system has been hacked! He and his team manage to trace back to a small town in the middle of the US and Taylor takes off to find the hacker and get his system back.
Oh, I should probably mention here that Taylor is a thoroughly unlikeable misogynist, a typical Silicon Valley guy who works all the time and only cares about his core team of men.
He reaches the origin of the hack and almost immediately meets Harper Watson. He thinks she's beautiful and hopes she'll lead him to the hacker - except she is the hacker. She's also a genius, just as smart as Taylor. The resulting game of cat and mouse is intriguing, fun, and makes for a completely enjoyable read. The fact that the two have great sexual chemistry is just a bonus.
This is the first book from C.D. Reiss that I've read, but I've already preordered the next two that have to do with characters from this story. I come from the ITS world so I loved the technical aspects which were well researched and not too much for non-techies. The romance is hot and also tender. I thought it impossible that I'd grow to like Taylor, but by the end of the book I was totally team Taylor. Both he and Harper are great characters. I'll add that it was unusual for me to read a book entirely from the male hero POV and I found it thought-provoking to see how Taylor approached his life and the resulting changes due to the hack.
While not hitting the reader over the head with a sledge hammer, Ms. Reiss also made some great points about the 'elite coasts' and the rust-belt midwest. Harper's town had faded; the jobs are gone, the young have moved out, and there's not much hope left for the remaining people. Her writing is descriptive:
"We're the sale of the earth's what they say. Them in power, with the money. They stroke us. Jerk us off with some bullshit about how hardworking we are. Tell us we're the real America. Like we're stupid. Them fucks set man against man so we can feel like winners, but let me ask you." He held out his arms and stepped back. "Do I look like a winner to you?"
At the same time, there are many funny parts strewn into the story. The townspeople are real, and their humor shines through the book. Ms. Reiss manages to balance all the intrigue, the banter, the sex, the romance, and the politics into a satisfying and delicious goulash of a story that fills you up and warms you.

Link to Amazon
Posted by AntrimCycle at Wednesday, September 20, 2017