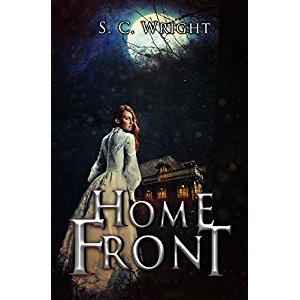 In this second book of the Sanctuary series, Kana has arrived in the jungles of China towing her young son, Michael. She meets up with Vincent (the werewolf boyfriend), Gabby (the ice queen), Lola (Gabby's shapeshifter daughter), Chloe (the vampire), Barney (the shade), and Luca (the trickster) in Gabby's new hotel for monsters.
Kana struggles to fit in as a mere human. She doesn't listen, thus causing more trouble for the group, but when Chinese soldiers show up, and then a new monster, Circe, it's up to Kana to save them all with a little bit of help.
This is a great book for YA readers who will recognize many of Kana's traits in themselves and their friends. She's about twenty-two in the book, but often seems much younger. Yet there's no doubting her love for her son and her loyalty to her friends. Now I need book 3 to come out!

Link to Amazon
Posted by AntrimCycle at Thursday, September 14, 2017