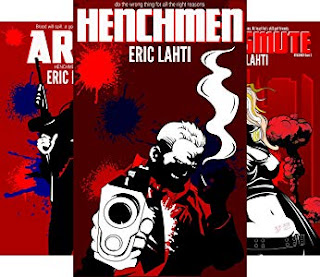 I've caught bits of this author's writing in other places and his book. So glad I did. If you like Tim Dorsey or Carl Hiaasen with an edgier graphic novel feel, then this is the book for you.
Henchmen is a group of 'bad' guys headed by a seven-foot-tall woman named Eve. Told in the POV of Steven, Eve's -man, the story starts with a heist of some high-tech body armor. Celebrating their success at a Japanese sushi bar where one eats off the naked body of a woman, into over the girl who's their table. This leads them into a series of adventures involving Congress, secret agencies, gods, and aliens.
There are some laugh-out-loud moments and a lot of the wry humor I like. The action moves along pretty well. The battle scenes are well-written; obviously, the author knows personal combat and weapons (at it seemed so to me).  There are some typos but they didn't bother me as I was to read what happens next.
The book is a novella it's a quick read, and I highly recommend it if you like this book. Even if you think you don't, try it because I think you might like it.

Arise picks up several months after the first book ends. Steve, Jessica, and Eve find new enemies and some surprising allies. The god of Dreams has taken over Washington DC and started his own religion, and the other gods are not happy. It's up to the Henchmen to take care of the god they freed or face consequences from the other gods.
There are some good fights and the humor I like from this author. I the story just a smidgeon slower than the first book, but it's still a good read.

Transmute is the third and last book in the series though I hope there's more. There to be a corollary series I need to investigate.
Steven has taken the place of the god of Dreams. It's frankly taking some getting used to for him, and a problem for Jessica since they get called away by his followers almost every time they sit down to eat. This story is more fantastical and introduces more characters while bringing back one surprising old character. It's a great story and a fun read.
I highly recommend this author and series if you like clever writing and humor in an action story.