Book Review: The Warp in the Weave by Jane Thornley 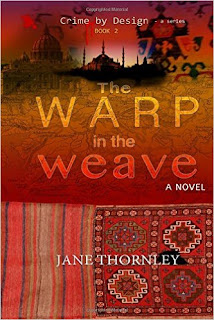 I've had this book on my TBR pile for a while and finally had the chance to pick it up and read it. I admit I didn't read the first book in the series (though I'm going back for books 1 and 3 now), but I found that this works well as a standalone story.
Phoebe McCabe is part-owner of an antique store in London that specializes in carpets among other objects. Phoebe is also on Interpol's radar due to her brother, Toby, and her partner's son, Noel, stealing a treasure (in the first book). She's determined to bring them to justice because of their treachery.
However, Phoebe is drawn back into intrigues as her shop is broken into and she discovers a secret left by her brother. This sets her off on an adventure to Istanbul and a reunion of sorts.
The story is well-written and Phoebe is an interesting character, a bit impetuous but loveable all the same.  Besides her interest in fiber arts (I learned a lot about carpets), Phoebe is a knitter and uses the craft to calm herself when things get too crazy. As I said above, I'm going back for the other books in this intriguing mystery series.

Buy at Amazon
Posted by AntrimCycle at Friday, July 22, 2016