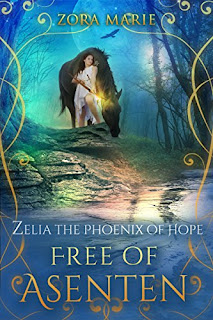 The fate of nine realms rests on the shoulders of one desperate girl with a daunting power and a harrowing choice: to be the cause of great suffering and despair? Or be banished from the first place she felt secure since being a small child, and back to the world from whence she came? When the wizards who created her fear that their creation was tainted, the Phoenix of Hope could become the Phoenix of destruction. With time running out, the wizards’ worst fears are careening in.

Quotes:
“I do not see how, even now, you should be dead,” he said standing back on his heels with a puzzled look.

Perking its ears forward a buck came up and smelled her. Turning he said, “I do not know about this one, she speaks our language, but she smells funny.”

When the screams of the last Darkan came to an end, Zelia put out the flames as she fell to her knees, drained of energy. The trees still moaned in pain though they did not blame her, she had kept the flames from scorching most of their leaves.

Despite all odds against her, including lightning strikes that fried multiple computers, Mother Nature couldn’t keep Zora Marie from getting this story out for the world to see. She is a Jill of many trades who has done everything from bottle-feeding calves and being a midwife for a wide variety of animals to making picture-perfect wood burnings and yarn from her home raised angora fiber. Numerous hours have been spent in engineering and shop classes, absorbing all the knowledge her fantastic teacher had to offer. She spent so much time hunting, trapping, and fishing with the guys that she earned the title of ‘river rat’, and yes, that is a compliment. Her skills at hauling hoop nets into the boat and filleting fish have surpassed even the most experienced men on many occasions.
Hanging out with the guys has had its ups and its downs, but you can be sure it’s produced some awesome stories. For example, she can honestly say that the worst thing she has ever eaten was a skunk. Yes, you read that right, nothing like a big game cookout for the guys to have a little fun and feed everyone skunk rump roast. In case you’re wondering, they taste the same as they smell and leave a lovely aftertaste that spoils your beaver pot roast and barbecue.
Her time on the river and in the woods opened her eyes to one simple fact: it’s the simple things in life that ground us. Things like the peace that comes from watching the sunrise as a young mink plays in the shallow stream nearby or the chirping of crickets as the night sky lights up with the stars of distant galaxies.
With all that said, she hopes you will follow her and Zelia on this crazy journey we all call life.
Thank you for reading!
Join her Facebook Event here!
Posted by AntrimCycle at Monday, July 25, 2016