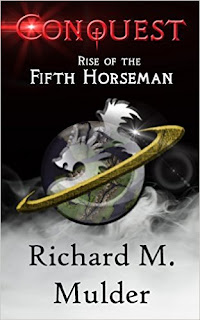 Conquest: Rise of the Fifth Horseman is the first book in the Fifth Horseman series. It's a fast-paced fantasy that melds a lot of different concepts fairly successfully.
The story starts with Allan, a corporate lawyer, proposing to his girlfriend of four years, Lily, in a very awkward scene in a restaurant. Lily is an agent for the NSA and though she loves Allan, her job (which he knows nothing about) would interfere in a marriage between them.
As it turns out, neither Allan or Lily are what they seem and I mean that in a metaphysical sense as the reader soon discovers. Mr. Mulder has woven in strands from both the Old and New Testaments, dragons, conspiracy theories, nano technology, myths and legends about  such diverse historical figures such as Elijah, Tamerlane, John the Apostle, and Noah to a cohesive adventure story.
Allan and Lily must save Earth from a soul-sucking creature while passing through portals to another world. I admit I was a bit confused about the logistics here, but it doesn't really matter to the story. There is a lot of violence, some gratuitous in my opinion, and I wasn't especially happy with the ending, but I look forward to the next book because, in the main, this was a good story that kept my interest. I recommend it to readers looking for something just a little different from the usual.

Conquest: Rise of the Fifth Horseman is on sale now and you can buy it here Amazon