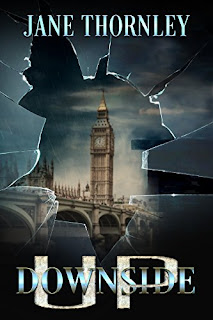 Jenna Elson has returned to London to help her Aunt Clair after the death of Uncle Dan, Clair's brother. The police have ruled it accidental, but Clair is convinced that Dan was murdered by one of their neighbors. Clair has been bound to a wheelchair since childhood and is also agoraphobic, so it's up to Jenna to investigate even if she thinks her aunt may be having fantasies.
Clair was always the impractical guardian, encouraging Jenna to escape to the rooftops and be Clair's eyes, reporting back on the world that Clair will never see. Now Jenna can use that ability to spy on the neighbors and try to find Dan's killer.
The neighbors are an eclectic group, worthy of participation in a Christie story. There's the odd painter of slasher nudes, the handsome and esteemed Shakespearean actor, the lonely old lady and her cats, and more. As Jenna eavesdrops and learns more, she becomes suspicious of the two young men her aunt has hired, one to tear up the garden and the other to instruct Clair on her technology skills. Then there are more murders though Jenna suffers a fall and a head injury which gives her partial amnesia.
I loved the idea of a person 'roofing' as Jenna calls it. London is a perfect city for this with it's rowhouses and chimney sentinels. Dickens certainly used this idea, and I've read numerous Regency and Victorian historicals where roofs were used for passages by cat burglars and spies. This is the first book set in modern times that I've read where someone takes advantage of the aerial roadways, and it fits in perfectly here. Jenna's backstory explains her fascination with going up and about.
No one is whom they seem in this thriller. I admit I figured out the killer pretty early though I was surprised at another little twist, but the characters are very interesting and different, fun to read about. I liked how Ms. Thornley portrays Jenna's viewpoint of them as she watches them from the roofs versus once she actually starts to interact with them. She finds she has misunderstood much of what she saw from a distance which only makes the mystery more puzzling and frustrating with her mind only remembering partial flashes of what happened.
I must give a special shout-out to Mac, Uncle Dan's dog. He is just adorable and has his own place in the cast of characters.
There are two more books planned in this series and I look forward to them both, wanting to read more of Jenna's marvelous eyeprints from the roofs of London.


Link to Amazon
Posted by AntrimCycle at Monday, October 23, 2017