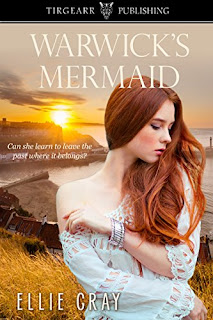 Chloe MacGregor has escaped an abusive relationship with her boyfriend. She's managed to make a new life in a fairytale cottage on the edge of the sea in Whitby, England where she makes jewelry and lives with her dog, Jasper. She acquires a new neighbor, Luke Warwick, but things are complicated between them. Chloe is still nervous with men and her issues are not helped by her mother who convinces Chloe that she isn't worthy of a man. Luke doesn't want complications and Chloe is chock full of them, but he can't help his attraction to her. That's before they both find out that Chloe works as PA for the company Luke just acquired which adds in more strain to their possible relationship.
Ms. Gray is a new author for me, but I was willing to take a chance on her writing just based on the book setting of Whitby. I'm so glad I did because this is a lovely book. It doesn't gloss over the very real issues of abuse, and Chloe's lack of self-confidence almost wrecks the budding romance. How Luke handles this was very realistic and sets a firm foundation for the two of them. I especially liked the ending because of this.
There are other nice touches; Jasper is a female dog, for example, but Chloe didn't want to disappoint the little boy who named her and so kept the male name. The descriptions of Whitby, of the cottages by the sea, and the sea itself are expressive and vivid. The plot keeps moving along as there's a lot of drama both in the company they work at and just in the elements around their homes.
I look forward to reading more from this author.

Link to Amazon
Posted by AntrimCycle at Saturday, October 21, 2017