Book Review: A Spell in the Country by Morgan Smith 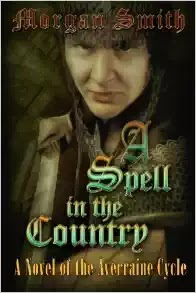 A Spell in the Country is another story in the Averraine Cycle. I had already read (and reviewed) Casting in Stone and enjoyed it very much. This book is much the same.
Keridwen is the youngest of a large family. She would have been expected to marry a young lordling but she is interested in fighting and swordplay so she enters the army instead. Despite her young age, she is put in command of a troop whose leader commits treason against his overlord. Keridwen is captured by Prince Tirais and is lucky enough to impress the Prince and his advisors instead of hanging.
Keridwen has a number of adventures, both in battle and in the Prince's court. She is a strong, smart, and lucky heroine who manages to prevail despite the odds.
The battle and fighting scenes are well-written and so are the scenes that take place in the soldiers barracks. The plot is intricate but moves right along. I enjoyed that many Welsh names were used in the story and look forward to more tales from the Averraine Cycle.

Link to Amazon
Posted by AntrimCycle at Monday, June 27, 2016