Book Review: The Greater of Two Evils by Jane Thornley 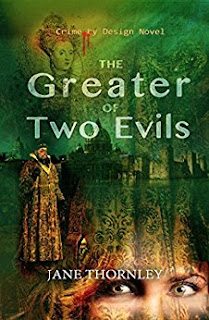 Well, the first book in this wonderful series is still on my TBR pile. Somehow I read the next two and when this latest one came out, I was too excited to go back as I wanted to see what happens next to Phoebe McCabe, antiquity expert and knitter extraordinaire.  (I promise to go back to Rogue Wave soon and see how Phoebe's capers all began).
In this adventure Phoebe is involved with the Russian mafia. Yagar, or Yaggie as Phoebe calls him, is ruthless and bears a grudge against Phoebe's old friend, Foxy. Phoebe and her 'crew' must disrupt his plans and save the day in typical Phoebe fashion.
Phoebe, as always, is wonderful. She seems a little more resigned to the criminal aspect of her antiquities career and as a result feels freer to assert herself. She's grown over the series and I like that very much. Her cohorts are all involved in the story though I confess I was waiting and waiting for Noel to appear. There's lots of knitting too! Another great book in this series.

Link to Amazon
Posted by AntrimCycle at Thursday, December 01, 2016