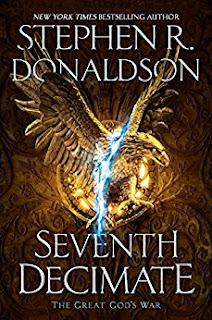 Prince Bifalt of Belleger has long fought in the war his country has waged for many years against their neighbor Amika. Magisters use sorcery, waging fire, wind, pestilence, earthquake, drought, and lightning, the Six Decimates, from safe perches while men on either side die below them. The people are suffering from the long war, crops ruined and homes destroyed. Belleger's only advantage is the use of rifles which Amika doesn't have (though they need magic to forge the iron), but otherwise, their army seems in the ascendant when suddenly, all magic disappears. The cause is the Seventh Decimate.
Bifalt is sent with a company of men by his father the king to find a book that holds the secret of the Seventh Decimate. They hope to finally win the war or at least negate Amika's use of sorcery. Belleger is hemmed in on all sides by impassable boundaries, but Bifalt plans to cross an endless desert to find the Last Repository, the library that holds the book he needs.
Donaldson has long been one of my very favorite fantasy authors; Mordant's Need is possibly my favorite fantasy series, and the Thomas Covenant books also have pride of place on my bookshelf. The Great God's War series looks to be another very enjoyable series, and I look forward to the next books.
Prince Bifalt is an antihero without the sympathy the reader could dredge up for Thomas Covenant because of his leprosy. Bifalt is a warrior who hates magic without much understanding of it; he only knows what he sees of it in battle. He's stubborn, makes a lot of mistakes, and is focused only on destroying Amica and preserving his own country. His worldview is extremely limited at the beginning of the book, and as he proceeds on his quest, Bifalt finds it hard to expand his perspectives despite traveling and meeting new peoples. Most of the book I and many of the characters just want to shake him to wake him up, but he's mostly stubbornly stuck in his own views.
"Regardless of his stature, his significance or meaninglessness, he had to be who he was. He had no other choice. The scale of the world did not change what he had to do, or why he cared about it."
Very slowly he starts to learn:
"A man is not a man at all if he cannot enter and enjoy every chamber of himself."
I love the way Donaldson writes. I always learn new words and I greatly admire how he uses them in his stories. The names of the two countries, Belleger and Amika, derive from Latin words for war and friendship for example. It makes me wonder about Bifalt's view of the two countries; he's wrong about so much, and I suspect this is a hint that his view here is flawed also. The three Magisters at the Last Repository are men, one who is dumb, one deaf, and one who is blind. The symbolism harks back to the old proverb "See no evil, hear no evil, speak no evil". The Six Decimates have both evil and good sides though Bifalt is slow to see any positive.
I truly savor Donaldson's works, and there's a lot to think about in the Seventh Decimate. The various characters are interesting and the worldbuilding is excellent. War is brutal - the battles are called 'hells' - and there's always two sides to everything, much to Bifalt's dismay; he's determined to only see what benefits his father, the king, and his country. How can you not love a book with lines like this:
"Words could not contain his vehemence. Instead, he uttered them like splashes of blood from the cut of a blade."

I usually only review Indie or small publisher books on this blog, but occasionally I have to add one for a favorite author.


Link to Amazon
Posted by AntrimCycle at Thursday, December 14, 2017