Darkmage is a dark fantasy, richly written, and filled with fascinating characters. The action starts 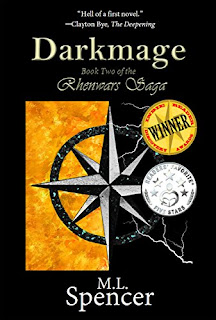 almost immediately and takes the reader on a journey through a detailed and nuanced world.
Darien Lauchlin is an acolyte, called back to Aerysius, the city of the mages after a stint on the frontier guarding against the enemy in the Dark Lands. It is his time to rise up to the level of mage, an occurrence marked treason from within and the destruction of Aerysius as the Well of Tears is opened and chaos reigns supreme.
Darien has incredible powers but is bound by his oath as a mage not to unleash his magic despite the temptation to do so. Accompanied by the priestess of Death, Naia, and his new acolyte, Kyel Archer, Darien sets out to save his world without losing himself at the same time.
The detailed world-building is amazing. It is very easy for the reader to picture each scene in the various lands they travel through. The characters are diverse and always engaging. There is great poignancy in the romance between Naia and Darien, as well as his lost love, Merien, who was sacrificed to open the Well of Tears. The pressures on Darien are immense, but his responses are believable as well as his befuddled acolyte, Kyel.
I can't wait to read Darkstorm and the other coming books in the Rhenwars Saga. If you like dark fantasy, this is a book you want to read.

Link to Amazon
Posted by AntrimCycle at Wednesday, September 21, 2016