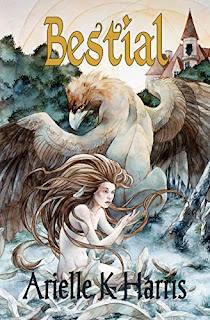 Yvaine was once a spoiled child reigning terror on her parents and servants alike until an enchantress changed her into a creature whose bestial form matches her beastly nature.
Beau is a young man of singular beauty and virtue who must look after his family when misfortune brings them into a ruin of their own making. Beau and Yvaine’s ill-fated paths will meet, and they will change each other irrevocably. But how can love last when lovers change beyond recognition? This is the story of a Beauty and a Beast, only not as you know it. Set in a pre-revolutionary France where magic abounds, the tale does not end with the Beast’s transformation. In many ways, it is only the beginning…

Arielle K Harris spent her formative years in Scotland, which has irreversibly confused her accent and spelling conventions. Lately she has returned to her hometown in Massachusetts, where she finished her first novel, Bestial, and is raising her young son. Arielle writes stories which focus on the human experience through the lens of fantasy, posing questions about reality through the means of unreality.

Posted by AntrimCycle at Saturday, September 10, 2016