Strawberry Kisses is the second book in this romance series about Rocky Harbor, Maine. Rachael 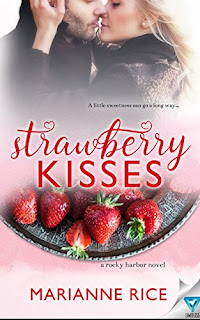 Riley was recused by her brothers from an abusive relationship and brought home to Maine. She's spent the year since hiding in her mother's kitchen and baking for the local coffee shop. Her sister Lucy attempts to get her out of her shell by enrolling them in a self-defense class.
The class is taught by Jake Morgan who also does landscaping on the side. He is attracted to Rachael and manages to also bring back some of the 'real' Rachael who was lost when her ex-boyfriend abused her. Jake has issues of his own, and it takes a while for him to confide in Rachael about his past.
The Riley family is interesting in that all of the six kids were adopted and came from abusive or uncaring homes. Now they have to overcome their issues to find the meaningful lives that their adopted parents want for them. Rachael was more neglected than abused, unlike some of her siblings, but that makes her all the more sensitive in looking for love.
Jake was raised by good parents but chose the bad-boy lifestyle. When it all goes wrong, he has to learn how to be the son his parents raised him to be. This romance story is just as much about the choices made by the hero and heroine as the romance itself, and that makes the reader think. But the love story is sweet too, and Rachael and Jake are a good pair.
Living in Maine where the story is set, I enjoy the mentions of places I walk by every day. I also can't wait to read the next book which is about Colton.

Posted by AntrimCycle at Wednesday, April 05, 2017