Book Review: It Had to Be You by Melissa Kate 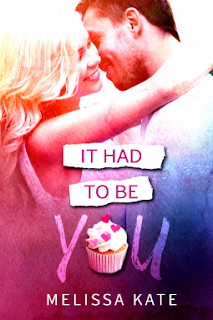 It Had to Be You by Melissa Kate is a cute romance and a quick read. Emma has a confectionary shop in town and Oliver is the Chief (I wasn't clear on this - he's a small-town Intelligence chief on the police department who gets called into the big city for special cases. It didn't make sense to me, and unfortunately, his job is a big part of the story). Emma and Oliver were best friends until high school when Oliver suddenly pulls away and becomes a lothario and confirmed bachelor. They are brought back together after an auction when Emma "bids" on Oliver and wins him to make renovations at her shop.
I like second-chance romances, but this was all over the map with extra storylines and padding that seemed to be thrown in. For example, there's a domestic disturbance call that results in a father being called in for a drunk-and-disorderly after embarrassing his young son. This was supposed to be funny (it wasn't), and I kept waiting for the son to show up again in the story. Maybe Oliver would befriend him? But nope, didn't happen. The same went for the prankster storyline (if Oliver is such a highly trained officer that he gets called in for kidnapping and serial murder cases, why is he also chasing pranksters or teaching a senior defense class?) It was too much of a mess for me to enjoy this the way I wanted to. I would have preferred that the romance be developed more. It's not a horrible book, but I wish more of the potential had been developed. Thanks to NetGalley for allowing me to read the ARC.
Posted by AntrimCycle at Tuesday, April 25, 2017