Book Tour and Excerpt: The War Queen by J.M. Robison 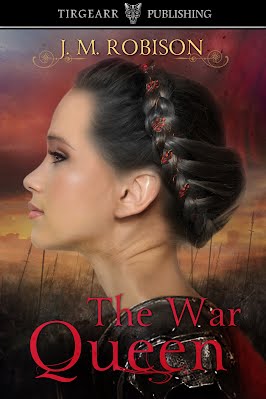 How do you dethrone a heart when its owner has stolen your kingdom?

Altarn is used to tolerating the biases of men. It comes with being the first female to secure the political State Head of Blindvar. But Kaelin, the State Head of Ruidenthall, crosses the line when he proposes a merger of their two states. Altarn has reason to believe this is Kaelin’s attempt to make himself king of both. Believing it’s her responsibility to “dethrone” him, she rides to her last ally to ask for aid.

While on the road, she’s kidnapped and taken to Ruidenthall. She wakes from a drug-induced sleep to hear about a foreign army marching upon Blindvar, and Kaelin capitalizing on her kidnap to make himself king. He threatens her life if she tells anyone, but she will suffer tyranny under a king if she does not.

When the final battle forces her hand, she has but one choice: to save Kaelin’s life or let him die. She never expected to dethrone his heart instead.

“And what do you think I lack?” she dared ask him, though she feared the answer because her void was empty and he looked sincere enough to fill it.
“Respect,” he said. “Respect is earned. They love you for sure, they trust you for sure…They love you because you smiled at them once, they trust you because their tax money goes right where you say it will, but you have not commanded respect and that is what your nation needs right now.
“Knowing you the short time I have,” he somehow made that statement sound like that time started this morning, “it appears you wield your emotions like a weapon and people have to back away or be stabbed. I don’t think it’s so much a fear of having a female in charge, it’s…having you in charge, and so people make that one and the same.”
The daggered truth stabbed her. She sucked in a sharp breath, which left little room for words to defend herself. His apologetic eyes made it worse, like he was being truthful though she wished he’d said it just to be ugly. She didn’t know how to defend against the truth.
“I fail to see why you care,” she snarled. Her exposed weakness left her more nervous about leading an army, and the bucket of white paint became so obvious now and Japheron’s comment about it laid her entire self open, naked and ready for Kaelin to dress her as he pleased.
“I care,” he said, lifting a finger as if he could shove the understanding into her skull, “because you showed up to a war council in a dress.”
She laughed at the ridiculousness of his concern, but his eyes didn’t change.
“You’ve never had a dress in a war council, so I can see how it would appear odd to you.” He pressed his lips together, and Altarn wished the real concern she saw in his expression wasn’t so earnest. “You’ve never been to a war council, have you?”
“I don’t see how the proceedings are any different than a regular court session where other problems with equal importance are discussed. I have been doing that for a year.”
He exhaled and leaned back, crossing a boot over one knee. “It’s different for Ruids. We discuss war plans every week because of our pirate problem. The mood is different, the light in our eyes is different. It’s life and death we speak of, and that holds a special kind of ceremony we honor in our speech, in our manners, and our dress.”
“Why would my dress not honor this ceremony?”
“It might…except you look like a damn princess. I don’t know about Blindvar, but we killed our princesses long ago. Your people don’t want a princess. They want a war queen. A princess can’t handle the emotional responsibility of sending people off to their deaths, but a war queen can.
“You’d be surprised how willing your soldiers would be to die for you, so long as you did it without crying as they march away. They need to be reassured you’ll hold your ground when they cannot.”
The image he put in her head gave her pause. She wanted to buck his advice— advice he’d earned through years with boots on the ground in a real fight. But he saw through her. She wasn’t trained on how to earn the respect he spoke of, and to ignore advice from someone who did would stunt her growth as a leader, even if that advice came from the man who expected Blindvar as payment for his services.
“I think you could use advice, too, Kaelin.”
He stood, folding his naked arms. The busy lacework tattoo almost made his other arm invisible. “Enlighten me.”
“I suggest when you send a man to stage an assault on me, you don’t send one who breaks so easily. Turns out, he needed saving.”
He unfolded his arms. “That’s off topic.”
“Brilliant, really, staging those two attacks on me. The Lord of Ruidenthall rushing in at the right time and saving the Lady of Blindvar is quite romantic, going so far as to complete the rescue with a kiss.” She watched that familiar twitch in his jaw, the debate dancing behind blue eyes.
He ducked his head, spinning around to leave the room.
Altarn laughed after him, reveling in her small victory of chasing him out of his own garden. If she had nothing else, she had blackmail since he had just admitted his attempts to woo her on their way to Athenya embarrassed him to the core. 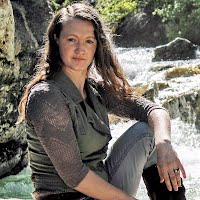 J.M. Robison is a fantasy historian who chronicles the events which force heroes to reveal their  mistakes, lead rebellions to dethrone tyranny, and unearth ancient secrets to free the oppressed. She's quested over lands with the U.S. Army and now works for the king under the honorable title of Deputy Sheriff. She makes her own shampoo, lotions, laundry soap, face wash, and toothpaste. Some day she'll pack the wagon and roam the mountains in search of dragons.

Posted by AntrimCycle at Monday, February 19, 2018