William Pinkerton, son of the founder of the famous Pinkerton Detective Agency, is in London in 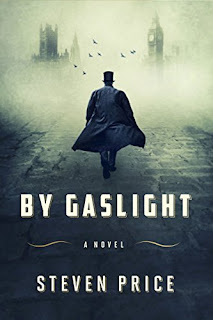 1885  hunting for a man his father never managed to find. Edward Shade is a famous thief but virtually undetectable, never having been caught. William has a lead through Shade's one-time lover, Charlotte Reckitt, but Charlotte eludes him by jumping into the Thames River. When her body turns up in multiple pieces in various parts of London, Pinkerton thinks all is lost. Then Adam Foole who wants to find Charlotte's killer contacts him and the two men pair up though neither trusts the other. Foole is as much a thief and conman as Shade ever was.
The main story follows the murder of Charlotte and the subsequent happenings but meanders back and forth in time with vignettes of both Pinkerton and Foole. Much of Pinkerton's story is based on history though the rest is fiction. The author captures the time period well. The action moves from London, South Africa, Chicago, the Wild West, and the Civil War. Edward Shade, the man Pinkerton is chasing, was once a member of his father, Allan Pinkerton's, force in the American Civil War. Both the son William and Edward Shade are greatly impacted by the elder Pinkerton's views toward them and what each of them subsequently thinks of each other.
The author is an acclaimed poet in Canada, and his writing definitely displays a lyric flow of words. This is a long book, over 600 pages, but the writing is brilliant. I did think some of it could have been cut out, but then later I'd find why that piece was needed to make the story whole. It's a complex story, peopled with a diverse cast of characters. Each is fascinating in their own way and add much to the book.
The author made a stylistic choice to use minimal punctuation. Dialog is not set off by quotes, for example. It took me a while to get used to, and I'm not sure I was ever really comfortable with it. It's a conceit that didn't aid reading in my opinion; I can only imagine it had something to do with his style of poetry.
Still, this is a masterwork. In some ways, it reminded me of Winter's Tale by Mark Helprin without the fantastical elements. I'd take a half star off just because of the punctuation choices, but this is a book I'll think about for a long time.

Link to Amazon
Posted by AntrimCycle at Saturday, February 17, 2018