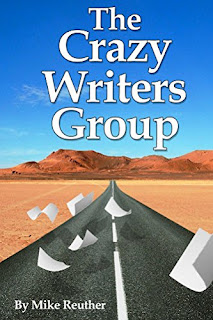 William is a member of a group called the Crazy Writers Group made up of William with three other would-be writers, Katrina, Steven, and Walt. The book follows their attempts to write a novel for traditional publishing with some of the pitfalls along the way. Any writer or someone attempting to write something publishable will recognize the characters in this easy-to-read book. E-publishing is just coming to the fore, and it creates a debate among the group - still being waged today - about the viability of electronic readers vs. books you can hold in your hand.
Mr. Reuther is a good writer, especially with his dialogue, and I enjoyed the first part where the group is meeting and William is interacting with them and other characters. The second part with the road trip was not so much a homage to Kerouac and the other Beat writers as being "too cute" in my opinion; I found the earlier realism of the story more engaging. It seemed to just end without much resolution.
I will say that one point in the debate about the quality of e-publishing is on display here; there are numerous proofreading errors that interrupt the flow of the story for the reader. It's an easy read, but a good editor could make this a better read.