Book Review: A Duke Like No Other by Valerie Bowman 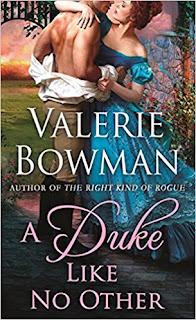 General Mark Grimaldi is ready for his promotion as head of the Home Office but for one thing: he needs a wife. Conveniently, he already has one, but he and Nicole have been estranged for ten years after a misunderstanding in their first months of marriage. He convinces her to come home and pretend to be reconciled, but she agrees only if he'll give her a child. They come home only to find they're involved in a murder investigation.
I've found historical books where there are a separation and reconciliation between the hero and heroine to be a mixed bag. Ms. Bowman does a good job in coming up with plausible reasons for the reconciliation though I thought the reason for the separation was a bit weak. The murder investigation worked as a subplot as well as the flashbacks to how Mark and Nicole met and married. There were some holes in the plot: how did Nicole work as a spy in Paris under Napoleon when she is so thoroughly English? How did she work as a Runner as a lady; didn't her mother and grandmother notice? But if you ignore these questions, it's a pleasant read. Nicole and Mark are fine as a couple as they have more in common than just the sex.
I was given this book from Netgalley, and I volunteered to review it.

Link to Amazon
Posted by AntrimCycle at Tuesday, May 01, 2018

Email ThisBlogThis!Share to TwitterShare to FacebookShare to Pinterest
Labels: A Duke Like No Other, book reviews, Valerie Bowman