Guest Guest Blog by Tony Bertauski
One is too many, a thousand not enough.
This quote is usually reserved for AA meetings, but not necessarily exclusive to booze. As humans, we all want something, whether it’s another cigarette, a larger slice of pie or our children home safe. Naturally, we want to feel to feel good. It’s built into our instinct, our sense of survival. Written somewhere on our DNA is the need for a happy ending, that when this is all over the narrator of our life will announce in classic Disney tone, “And they lived happily ever after.”
Dystopia reveals the light of our lives by walking through the dark. It explores the true nature of our predicaments, the tragic adventure of the human experience. At times, it shows how dark we can become. How brilliant we are.
But no story really ends. It simply transitions into another. One ending begets another beginning. When we look back on our lives, those catastrophes that seemed like mountains are merely anthills that made us tougher; those eye-high hurdles made us stronger. We loved deeply and fought valiantly. If we’re lucky, we achieved our dreams: our children are safe, our grandchildren are healthy and our vast wealth, the proof our successes, the currency of our value, is inexhaustible. Happily ever after.
But when the time comes, when our ending nears, will we let go so easily?
We’ve worked so hard to become who we are, to build our castles and protect our young. Is it not unfair to walk away from what is rightfully ours? Especially when so many people in this world waste their lives, those moments that now—lying on our last bed counting our remaining breaths—seem priceless. It seems ludicrous—from our old, decrepit vantage point—that anything should die.
But death is our ending. Happily or not, it comes. It is part of life, we say, but those words leave our lips much easier before we’re sucking our numbered breaths, when we’re clinging to our last moments. Those moments that seemed endless and inexhaustible slip away as we draw our last breath. When the last one arrives, will we grasp at it, or let it go freely?
Is one too many, and a thousand not enough?

Foreverland Boxed by Tony Bertauski The Complete Foreverland Saga.
THE ANNIHILATION OF FOREVERLAND When kids awake on an island, they’re told there was an accident. Before they can go home, they will visit Foreverland, an alternate reality that will heal their minds. Reed dreams of a girl that tells him to resist Foreverland. He doesn’t remember her name, but knows he once loved her. He’ll have to endure great suffering and trust his dream. And trust he’s not insane. Danny Boy, the new arrival, meets Reed’s dream girl inside Foreverland. She’s stuck in the fantasy land that no kid can resist. Where every heart’s desire is satisfied. Why should anyone care how Foreverland works?

FOREVERLAND IS DEAD Six teenage girls wake with no memories. One of them is in a brick mansion, her blonde hair as shiny as her shoes. The others are in a cabin, their names tagged to the inside of their pants. Their heads, shaved. Slashes mark the cabin wall like someone has been counting. Hundreds of them. There’s wilderness all around and one dead adult. The girls discover her body rotting somewhere in the trees. As the weeks pass, they band together to survive the cold, wondering where they are and how they got there. And why. When an old man arrives with a teenage boy, the girls learn of a faraway island called Foreverland where dreams come true and anything is possible. But Foreverland is dead. In order to escape the wilderness, they’ll have to understand where they are. More importantly, who they are.

ASHES OF FOREVERLAND Tyler Ballard was in prison when his son created a dreamworld called Foreverland, a place so boundless and spellbinding that no one ever wanted to leave. Or did. Now his son is dead, his wife is comatose and Tyler is still imprisoned. But he planned it that way. The final piece of his vision falls into place when Alessandra Diosa investigates the crimes of Foreverland. Tyler will use her to create a new dimension of reality beyond anything his son ever imagined—a Foreverland for the entire world. Danny, living outside of Spain since escaping the very first Foreverland, begins receiving mysterious clues that lead him to Cyn. They are both Foreverland survivors, but they have more in common than survival. They become pieces of another grand plan, one designed to stop Tyler Ballard. No one knows who is sending the clues, but some suspect Reed, another Foreverland survivor. Reed, however, is dead. Everyone will make one last trip back to Foreverland to find out who sent them. And why. Kindle Edition, 935 pages Published March 21st 2015 by DeadPixel Publications

During the day, I'm a horticulturist. While I've spent much of my career designing landscapes or diagnosing dying plants, I've always been a storyteller. My writing career began with magazine columns, landscape design textbooks, and a gardening column at the Post and Courier (Charleston, SC). However, I've always fancied fiction.
My grandpa never graduated high school. He retired from a steel mill in the mid-70s. He was uneducated, but he was a voracious reader. I remember going through his bookshelves of paperback sci-fi novels, smelling musty old paper, pulling Piers Anthony and Isaac Asimov off shelf and promising to bring them back. I was fascinated by robots that could think and act like people. What happened when they died?
I'm a cynical reader. I demand the writer sweep me into his/her story and carry me to the end. I'd rather sail a boat than climb a mountain. That's the sort of stuff I want to write, not the assigned reading we got in school. I want to create stories that kept you up late.
Having a story unfold inside your head is an experience different than reading. You connect with characters in a deeper, more meaningful way. You feel them, empathize with them, cheer for them and even mourn. The challenge is to get the reader to experience the same thing, even if it's only a fraction of what the writer feels. Not so easy.
In 2008, I won the South Carolina Fiction Open with Four Letter Words, a short story inspired by my grandfather and Alzheimer's Disease. My first step as a novelist began when I developed a story to encourage my young son to read. This story became The Socket Greeny Saga. Socket tapped into my lifetime fascination with consciousness and identity, but this character does it from a young adult's struggle with his place in the world.
After Socket, I thought I was done with fiction. But then the ideas kept coming, and I kept writing. Most of my work investigates the human condition and the meaning of life, but not in ordinary fashion. About half of my work is Young Adult (Socket Greeny, Claus, Foreverland) because it speaks to that age of indecision and the struggle with identity. But I like to venture into adult fiction (Halfskin, Drayton) so I can cuss. Either way, I like to be entertaining.
And I'm a big fan of plot twists. 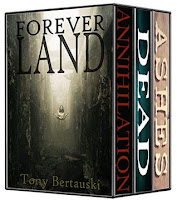