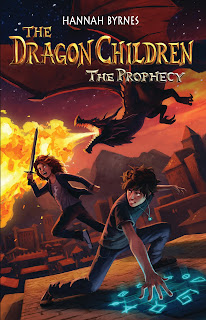 Aimed at middle-grade readers, and lovers of all things magical, the novel is the first installment in a four book series set in Dragonsreach, a mystical island where the wisdom of dragons is man's last link to the magic realms.

Kai is the shy, studious son of a TV Astrologer. Pony-loving Bridget hates maths and wants to be a Knight. They are the Dragon Children, destined to restore man’s faith in magic. Their arrival in Dragonsreach means that an age-old prophecy may be fulfilled, and dragons will rule the skies again.

After a legion of iron birds attack, the dragon eggs are lost and Bridget and Kai are separated. Each sets out on a perilous quest leading to dragon hordes, mysterious wizards, invisible temples and ancient magic before facing a deadly foe who is not what it seems.

The first edition novel was released in February 2015 and attracted 4 & 5* reviews and hit the bestseller lists.  However, the author noted comments regarding the flow of the story in a couple of reviews and decided to revise the story for the new edition.

Hannah says:
The Dragon Children: The Prophecy already has fans, but I am still learning my craft.  I want readers to become fully immersed in this magical world so I revised the book.  It has been a learning experience, but I am really proud of the results.

The Dragon Children: The Prophecy is now available on Kindle and will be FREE to download between 31/10/15 and 02/11/15.  Please take advantage of this offer, share with those who will enjoy the book and leave a review.

The paperback will be released the week beginning 2/11/2015 and will raise funds for Make-A-Wish UK.

Posted by AntrimCycle at Saturday, October 31, 2015