New Release - The Quays of Lac-Carge by Danielle Ste. Just 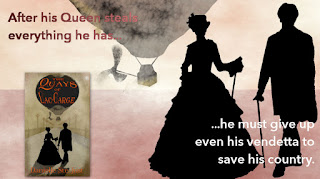 A disgraced man has promised to ruin the ruthless queen who wrongly accused him. Yet can he and his allies save their country from her insatiable greed?

Lac-Carge is the capital of a nation on the brink of a new age. Gaslamps light the city streets, and sandusk pellets propel motorboats and the fledgeling balloon industry. Yet underneath this shiny new technology, magic still lives.

This is a world where Alexander was born into privilege and great wealth, only to have it stripped away by an insatiable queen. Four years later, he's conspiring with the quay workers at Lac-Carge's busy shipping port. Their goal? To wrest control of the quays back from the queen.

Yet no one realizes the depths to which their monarch will sink. Not only is she intent upon keeping the property she stole from Alexander, she is also scheming against her own daughter, the heir to the throne.

Enter Alexander's old flame, now a daring aviatrix; and his boyhood schoolmate, a receded thaumaturge whose powers may not have receded as much as he claims. Together, they must save Lac-Carge and its princess.

Join Alexander, Chloe and Hugh as they battle walking dead, bloodthirsty beetles, the bitterest winter Lac-Carge has ever experienced, and everything the queen and her thaumaturgical allies can muster. 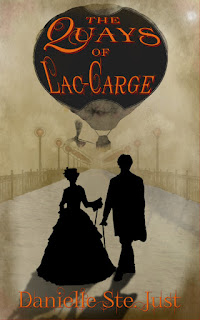 Amazon purchase link
Facebook
Goodreads
What reviewers have had to say about Danielle’s work: “Exquisite storytelling and a fantastic imagination….” “…hugely enjoyable….” “Brillant.”

Danielle Ste. Just is a lifelong writer and reader. She loves all fiction, and especially great science fiction and fantasy. She loves to share her worlds with others and welcomes comments and emails.
Posted by AntrimCycle at Saturday, October 03, 2015