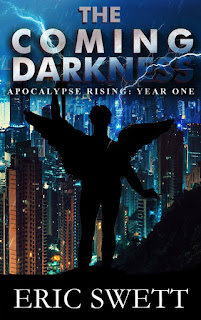 BLURB:
Justin is a fallen Angel. He just happens to be one of the Horsemen of the Apocalypse, the Grim Reaper himself, Death. A year has passed since he remembered who he was and what he is. He is regaining some of the abilities and memories he lost when he chose to fall to earth and live amongst humans, but he has a long way to go before he can fully reclaim his title. When Justin comes across a young girl being chased by a monster, he does what he can to save her, but he soon discovers this is no normal girl, and failing to save her will change the world forever.
EXCERPT:
“Something tells me this is the place,” said Samantha.
“I think you’re right.” Justin felt the Power emanating from the place; the origin or intent of the magic cast upon the little building remained elusive.
Justin opened the door and Samantha strode inside. Her sharp business attire and well-manicured look terribly out of place in the shop filled with countless shelves filled with books and dark little trinkets and charms that hung from hooks throughout the room. She sniffed and wrinkled her nose. “It smells like a tomb in here,” she said as she picked up the desiccated corpse of a chameleon from a nearby shelf.
“I’ve smelled worse,” Justin said as he entered the room and shut the door behind him. He stopped when he stood behind her and whispered, “Human magic often requires these sort of physical components, at least until the wizard is powerful enough to eschew such trappings.”
“How…uncivilized,” Samantha said as she placed the dead lizard back on its shelf.
“So true.”
The Angels turned to see a man entering the shop through a doorway behind a broad wooden counter. He was tall for a human, though he fell well short of Justin’s six and a half feet. He wore a dark purple button down shirt that nearly concealed the tattoos that covered his biceps and upper chest. Thick black and grey stuble covered his shaved head. His eyes caught Justin’s attention. He saw that sort of dark fire burning within the eyes of men before. Monuments carved in their likeness and tomes filled with tails of heroism and infamy contained their names.


“Welcome to The Curious Cat. My name is Mathew Finitz, and this is my shop.” 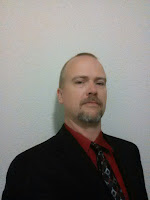 ABOUT THE AUTHOR:
Eric Swett is the husband of Tracy and the father of Zachary, Connor, and Kaitlyn, and could not be prouder of his family.
He lives in Statesville, North Carolina, spends his daylight hours working in IT and has done so for the past six years.
Being a fan of all things geek, he has spent most of his life reading science fiction and fantasy. He started writing in high school, but it wasn’t until he moved to North Carolina that writing became anything more than a hobby.

You can find Eric online at Facebook, Twitter, Tumblr, and My Writer’s Cramp.
Posted by AntrimCycle at Monday, November 30, 2015