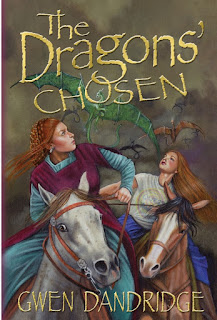 The dragons came from beyond the Crystal Mountains, demanding a virgin sacrifice…and Princess Genevieve learns she's it when she's handed a golden token–the mark of the chosen. Genevieve accepts her fate. She must, in order to save her kingdom. But the journey to her final destiny is complicated by the arrival of Chris, a 1970s Berkeley co-ed. To Chris, the whole scenario reeks of deception. Where she comes from, corsets are for burning and virgins are hard to find. She's sure the dragons are out for more than innocent blood, but the only way to find out what they really want is to accompany Genevieve on her journey. Not what she had planned for her sophomore year of college. Genevieve is duty-bound–unless Chris is right. Then her sacrifice would mean nothing. Other than woe to those who duped her...

Buy it on Amazon

I was born in the deep South, but I lived on Long Island most of my first years. It was after I moved to Berkeley, dragging along three small children, that I started to think about creating something more...

For awhile I managed to bury my afterwork creativity into dance. I flitted from Scandinavian to Irish, to English step dancing, to Morris dance and sword. Having a short (or sometimes long) fling with each until finally settling on Morris and English short sword (Rapper) as my favorites.

Northern Renn faire was a hoot to participate in as was the Sidmouth International Dance festival.

After moving to Central California and marrying my love, my creativity has evolved even more, into more tangible forms: mosaics, stained glass, and finally, writing.


Gwen is also the author of the award-winning book The Stone Lions.

Posted by AntrimCycle at Saturday, January 02, 2016