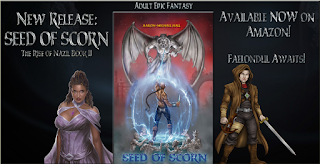 Blurb:
With The Rise of Nazil and the defeat of the Vereuxs, the lands of Faélondul were freed. Pentanimir Benoist now stands as Zaxson—the most powerful man in the lands. The love he held for Brahanu was the catalyst for Nazil’s liberation. Will that same love also lead to its destruction?

In Seed of Scorn, the much awaited sequel to The Rise of Nazil, Pentanimir and the entire House of Benoist face an insidious threat—a threat that assails them on all fronts, yet remains largely invisible. Both Nikolina d’Garrion once pledged to Danimore Benoist and Molag Bomgaard—unwittingly manipulated by an ancient evil— threaten the peace of the lands and the lives of the Benoists.

With the release of a Zon’tul and an indissoluble pact, the pall of darkness manifests. A darkness the Guardians could not foresee nor deter. Will the warriors align with those of Nazil or allow the darkness to consume them?

Seed of Scorn takes the epic saga to previously unheard of levels of complexity and intrigue. It is an enthralling tale of love, honor, betrayal, and the perfidious depths people will descend for the sake of revenge. Aaron-Michael Hall’s craftwork—the unforgettable characters, the surprising twists, and turns, the intricate, rich plotting—will dazzle you. If you loved The Rise of Nazil, prepare to be blown away! Seed of Scorn will grip you from the beginning and leave you in awe. 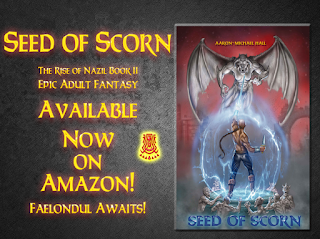 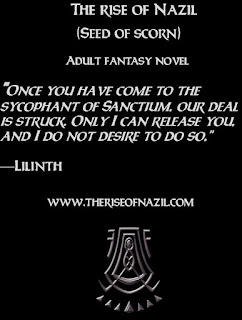 About the Author
Aaron-Michael Hall is a native of southern Illinois. He was born and raised just across the Mississippi River from St. Louis, Mo. in Lebanon, Illinois. After moving about the country, he has returned to his roots and where this journey began.

When he was younger, Aaron-Michael would get lost in the fantasy and sci-fi worlds created by Andre Norton, N.K. Jemisin, R.A. Salvatore, Octavia Butler, Ursula K. Le Guin, and R. Scott Bakker. These are but a few of his favorite authors.

Being from a large family, Aaron-Michael would often steal away high in a tree or nearby wood seeking solitude. While enjoying the peace his natural surrounding provided, he created his own worlds and languages. For hours, he would be lost in the magnificence of his own imagination. Some characters and elements created then are used now in his current series. 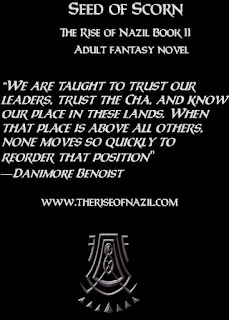 Seed of Scorn is the second novel in The Rise of Nazil series. It is a fun and intriguing read with a host of characters. When asked why he wrote this series, Aaron-Michael simply said, "It needed to be written."

It is his hope that the readers enjoy the wonders of Faélondul even more than he enjoyed writing about them.
Posted by AntrimCycle at Monday, January 25, 2016