Cover Reveal: In the Dying Light by Angela Carling 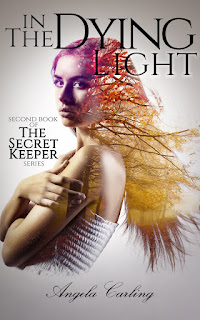 The blurb for In The Dying Light
Winter Merrill knew it would be difficult when she took on an ancient curse to save her family, but couldn’t have imagined the isolated existence she would inherit.

When her long-time boyfriend’s demanding college schedule competes with her needs, Winter is left completely alone to fight the dark secrets she bares. At her breaking point a stranger enters Winter’s life, one who understands how she feels and more importantly knows how to eliminate the curse.
Will his friendship be a new beginning for Winter or will it prove to be her demise?

Get caught up! Grab The Secret Keeper, the first book in the series before In The Dying Light comes out in March.

Over and over in my head I repeated, “She can make my secret go
away.” I’m not sure if I was trying to convince myself, or trying to keep
myself from going nuts, but the phrase calmed me as I drove.

I found Lejo Street and began the steep climb to the top. The houses
in this neighborhood were small. Most were weathered if not
completely forgotten. Pines grew too close together. Piles of rusted tools
and long-forgotten bathroom fixtures littered the landscape, hidden
only by overgrown grasses and neglected Quakies. No wonder everyone
thought it was creepy.

My heart rate quickened with the ascent, and my palms left sticky
sweat on my steering wheel. I wiped them on my jeans only to have the
moisture build up again immediately. Soon there was nothing but dense
forest; a blur of green, broken only by the ashen skies above. The rain
came down in unyielding sheets and I turned up the windshield wipers.
Back and forth they went like a giant metronome, keeping in step with
my nervous heartbeat.

I strained to see out the windows until all at once there was nothing
in front me but a large rusted metal gate and a cracked wood sign, painted
long ago, that declared, “No trespassing.” Beyond the gate, through the
trees and the rain, I saw the pale blue house that the girl in the park had described.

One more time I said out loud, “She can make my secret disappear.”
I’d almost convinced myself now. I had to be convinced, what with the
dilapidated house in the middle of nowhere and the stormy weather.
Everything screamed “Don’t go in!” but I was driven to try something,
anything, not to lose my best friend and boyfriend.
I climbed from the car and ran until I reached the porch, slipping and
having to catch myself as I tried to take the stairs too fast. Light spilled
out through a crack in the curtains, letting me know someone was there.
I lifted my hand to knock on the old splintered door and froze. I didn’t
know the secret keeper’s name. How would I address her? Before I could
decide what to do, the heavily scratched door handle turned and the door
opened a crack. My mouth fell open. The eyes that peered through the
opening were surprisingly young.

My throat felt tight as I swallowed and it sounded loud to me. I
could turn and run. Everything in my gut told me to go, but I stood like
a marble statue frozen by my anguish.

Who are you looking for?” she asked.

Her melodic voice made me think of dozens of wind chimes all
tinkling at once. Still, I felt uneasy.

I made myself spit out the words. “The Secret Keeper.”
An excruciatingly long minute passed and I thought she might tell
me that I had the wrong house or that I should get off her property.
Finally, in a voice no louder than a whisper she said, “Come in. I’m the
Secret Keeper.”

A little about Angela
Angela Carling was raised in Palm Springs California, but lives Arizona with her husband, three kids and five felines.  After years of denial she finally admitted that she is a hopeless romantic which led her to write her first Young Adult book Unbreakable Love. Since then she’s published three more books, Shackled, Becoming Bryn and The Secret Keeper. Shackled won the silver IPGA award in 2012 and has been optioned as a screenplay. She always eats the frosting off her cake and leaves the rest, and can be caught singing in public bathrooms.  When she’s not writing YA novels, she’s mentoring teen writers, making pizza with her family or dreaming of taking a nap, not necessarily in that order.

Posted by AntrimCycle at Wednesday, February 10, 2016