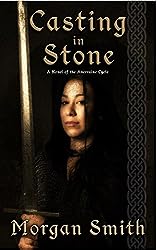 Caoimhe is a warrior in the principality of Rhywn. She is somewhat feared because the circumstances of her life have been scarred by a malign force that has followed her always, unbeknownst to her. The story is told in first person from Caoimhe's point of view and starts with a bang as she and a fellow hunter named Joss have to find and kill some wolves that have been killing children in the village. At least one of the wolves is supernatural, changing briefly into a man at the end of their battle.
Caoimhe's story is revealed gradually in flashbacks of her life. Her grandfather was the only relative who cared for her until her little sister Meryn comes along. Even her life with her little sister is marred by horrible circumstances, but I don't want to give away too much of the story.
Caoimhe is a fascinating woman, tough as a warrior must be, yet always dogged by the curse on her life. The rest of the characters are also engaging. Be prepared for a lot of swashbuckling in an excellent read.

Link to Amazon
Posted by AntrimCycle at Saturday, April 23, 2016