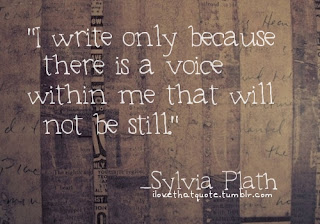 Other writers often say that they want their work to reflect their own "voice", but what does that mean? I've been thinking about it a lot lately.

Tone
There is a famous quote from Dorothy Parker: 'Don't look at me in that tone of voice.' Tone is exactly that, the attitude of each POV the author conveys where they appear in the story. The author achieves tone by word choice, sentence construction, and focus of the POV. I also think it depends on genre to a degree. YA Contemporary writing is more casual than Regency Romance; having your character say 'Cool' or 'Awesome' in a Regency novel would be jarring (wrong word choice). A fantasy set in a medieval setting or historical fiction story may generate dialogue that is a little more formal. The focus should remain the same throughout the scene. Set the tone and be consistent.
Each POV should have his own tone. It's a great way to differentiate between different POVs.

Some examples:
"Life and death appeared to me ideal bounds, which I should first break through, and pour a torrent of light into our dark world." This sentence is from the beginning of Frankenstein and sets the ominous tone for the rest of the story.
"I didn’t go to the moon, I went much further—for time is the longest distance between two places." This line sets a nostalgic tone from The Glass Menagerie.

Mood
Mood is the atmosphere that the writer communicates to the reader to set the atmosphere of the story. Is the scene light-hearted or dark? Emotional or unfeeling? As the mood changes from scene to scene, it is a good idea to change the mood in those scenes gradually, at least, most of the time. There may be some shock value that you as the writer wish to exploit in going from a comic moment to a death scene, but generally you want to lead up to the new mood.


Some Examples from Wuthering Heights shows the difference in mood invoked by descriptions of the two houses, Wuthering Heights and Thrushcross Grange. Each time Emily Bronte references one or the other, she is consistent in the mood she applied.
“There was no moon, and everything beneath lay in misty darkness: not a light gleamed from any house, far or near all had been extinguished long ago: and those at Wuthering Heights were never visible…” moody and dark

“Gimmerton chapel bells were still ringing; and the full, mellow flow of the beck in the valley came soothingly on the ear. It was a sweet substitute for the yet absent murmur of the summer foliage, which drowned that music about the Grange when the trees were in leaf.” serene and peaceful

Style goes hand-in-hand with both Tone and Mood as a writer's style helps create those two. The words the author opts to use, the manner in which a writer creates a mood are are based on style. An author may choose to use long sentences with formal diction to enhance the style of his work depending on subject matter or genre. Or perhaps the writer may use a certain dialect or a lot of adverbs (look away Steven King if you are reading this) to bring the reader into the story. How words are arranged in a paragraph or a sentence is what makes up the author's style.
Do you use curse words or euphemisms? Lots of description vs. bare details? These are all style choices.
One thing to remember is that style is always the author'e choice. Picking the wrong style for the genre or subject matter may make a reader give up on the book. I change my style when I write for fantasy vs. romance because it's what fits the genre.

Some Examples:
“I was a Flower of the mountain yes when I put the rose in my hair like the Andalusian girls used or shall I wear a red yes and how he kissed me under the Moorish wall and I thought well as well him as another and then I asked him with my eyes to ask again yes and then he asked me would I yes to say yes my mountain flower and first I put my arms around him yes and drew him down to me so he could feel my breasts all perfume yes and his heart was going like mad and yes I said yes I will Yes.” Ulysses by James Joyce has a unique style
"'Yes-en I's rich now, come to look at it. I owns mysef, en I's wuth eight hund'd dollars. I wisht I had de money, I wouldn' want no'.'" Huckleberry Finn by Mark Twain shows the use of dialect to show Twain's style of writing.

Voice
All three of these elements, tone, mood, and style, combine to create the author's voice. This is what makes your story your own. Setting the wrong mood or tone can take the reader off track in unintended ways. Being consistent in your voice is what makes for good stories.

I think Don Fry, writing coach and author says it best:
"Voice is the sum of all strategies used by the author to create the illusion that the writer is speaking directly to the reader from the page."
Posted by AntrimCycle at Monday, April 18, 2016