Tired of all the tales of damsels in distress? Princess Sofia decides to slay a few monster herself, with the reluctant help of her guards. 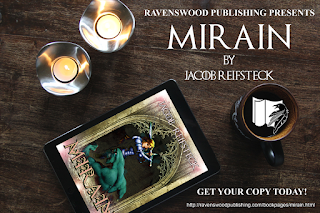 Guest Post:       Like most people, I'm a fan of interesting and relatable characters, always have been, most likely always will be. As such, one of my biggest goals in writing is to have the reader really care about the character. Not just concern over will they succeed, but will they feel sorrow or anger or pain. Mirain may be the story of a young beautiful princess and a brave knight, and his sarcastic squire, but what I really tried to get the reader to feel was that they knew these characters on a deeper level. The princess Sofia, and the knight Hector, are both quite young, so they have a lot going on in their lives than more traditional fairy tale-esque story heroes. Young love being one, but also the notion that they haven't seen or explored most of the world yet. Several things they come across are new to them and they just don't have the experience to handle it as well as they would like to. And quite often, they fail. It's not the incredibly powerful characters that tend to inspire me most, it's the ones that have to routinely learn from their failures and eventually become an imposing force that seems impossible to defeat. I'll site one of my favorite characters on this, Spider-man. Everyone's favorite wall crawler has enough of a hard time fighting elemental based villains that he can barely touch, but he also has to balance a job, maybe school, and a social life on top of it all, and notoriously fails at it. Regardless of failures past, neither he, nor my characters ever stay down for long, and that's part of what makes a good character in my opinion.
Possibly the second most important feature to have in an interesting character, again this is just my opinion, is a sense of humor. If Mark the squire doesn't have you at least smiling by the fifth chapter, then that's a failure on my part. While Sofia and Hector spend a large amount of their time trying to save the kingdom of Mirain, Mark is busy lamenting over how ludicrous it is that they're risking their lives fighting monsters. Through him, other characters show their own sense of humor, either by getting tired of hearing him talk, or joining in on his attempts at a joke. I want the reader to see these characters as friends that they'd like to hangout with, and what's a hangout with comrades without any laughs? I think this is something else I picked up from the web head's comics.
Oh yeah, also there are monsters. Two of my biggest inspirations through most of my life have been Legend of Zelda and Lord of the Rings, so I couldn't just leave out the big bad monsters. Not only do they provide a huge obstacle for the characters to overcome, but they also progress the story by simply being creatures, creatures driven to attack the good people of Mirain by a large and ominous force that looms throughout the story.
And what is this big, ominous villain? This antithesis to Hector's nature to help others, and the constant tormentor of Sofia's attempts to be a good leader? Well that would be a bit of a spoiler, now wouldn't it?

Blurb: Princess Sofia, just recently turned old enough to have her own personal guards. The guards, 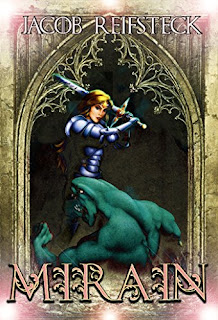 Hector, an unproven, yet ambitious young knight and his sarcastic squire, Mark, sees this as an opportunity of a lifetime to guard the noble lady from the safety of her castle...but the lady has other plans. Her home, the land of Mirain, has prospered under years of peace, but the princess becomes alarmed at the news of possibly superstitious events at the outskirts of the kingdom. Even more alarming is that few knights bother to acknowledge them, preferring to instead compete in tournaments for personal glory and recognition. The princess drags her unwilling guards to investigate the reports of monsters in the far off corners of the realm. Soon, they discovers a much bigger problem than anyone anticipated. 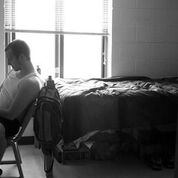 Author:  I'm just you average guy with his heads in the clouds. Raised in a fairly small town in between Ohio and West Virginia, the things I liked were usually not exactly what my friends and peers enjoyed. With the support of my family, I started my extra curricular writing when I was just out of high school. Things really took off when a group of people fairly similar to me in my third year of college. I've had my writing published in a few small local associations, but being a Ravenswood author is by far my most notable publication, and Mirain is the work I am most proud of.

Posted by AntrimCycle at Saturday, November 05, 2016