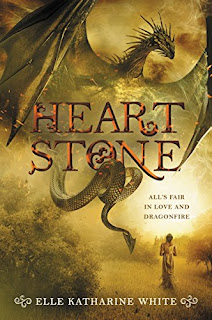 Aliza Bentaine lives at Merybourne Manor with her parents and sisters Anjey, Mari, and Leyda. Her other sister Rina was killed in a gryphon attack, so now the Riders and their warrior beasts have come to clean out the gryphon nest. Aliza's first encounter with a Rider is with their leader, Lord Alastair Daired in the middle of a hobgoblin fight where he's getting pelted with mud by Tobble who lives in the garden with his relatives and friends. Daired stepped on Tobble's toes, and they return fire with mud and Gnomic curses. As a result, Aliza and Daired take an instant dislike to each other though Anjey and another rider, Brysney, hit it off right away. Still, Aliza keeps running into Daired and his dragon Akarra; he still riles her though she's pretty friendly with Akarra. All differences are set aside when the Greater Lindworm awakens from its centuries-long sleep and begins to ravage the countryside.

As a fantasy, this book is very good. The worldbuilding is wonderful with all sorts of beasts including dragons, centaurs, wyverns, lamias, direwolves, and banshees, different classes (Aliza is a lowly nakla while Daired is a lord), different languages, and some religion. The battle scenes are crisply drawn, the herblore fits in well, and the characters fit their roles well. There's whimsy; one passage: "The roads to Dragonsmoor were hard and rocky, and four days bouncing around a cramped carriage had given us all an unlooked-for empathy with churned butter."

However, this is more than a fantasy novel; it is also Jane Austen fan fiction. I love Austen and I've read quite a bit of Austen fan-fiction as well as the original novels. Some are successful, but most falls flat (I'm looking at that vampire book especially). I really worried that this one would be a mess, but I loved it. If you haven't read Pride and Prejudice, you'll enjoy this anyway, but knowing the story is based on that book just enhances this book. The author was very smart to stick to some basic outlines and characters. Daired (Darcy) is still arrogant, snobbish, handsome, and with a heart of gold. Aliza (Lizzie) is a bit more undefined; the book is told in her first person POV and reflects her confusion over her feelings for Daired, first her dislike, then her realization that she was wrong and her burgeoning admiration for him that grows to love.

What the author did that I really like was to change some of the characters to reflect the genre. While Austen used caricature for Mrs. Bennett, Mr. Collins, Lady Catherine de Bourgh, and others to display some of the social strictures of her time, Ms. White has softened most of them and made them much more likable which is what you want in a fantasy. They may still have faults - Wydrick (Wickham) is particularly unlikeable but in a way that fits the fantasy aspect. I really liked Lady Catriona who was very pleasant and let her dragon take on the characteristics of the original Lady Catherine de Bourgh. Charis (Caroline Bingley) also receives much better treatment in this version.
There's some romance (it is based on Pride and Prejudice after all) though only about as much as one would expect in a fantasy book. But it's not too mushy for fantasy readers, but enough for the Janeites: "He leaned close, his forehead almost touching mine. "I wrote it once, and I mean it still. Whatever happens in the next few days, I want you to know that I wish you every happiness the gods can bestow. If I don't-"
"No." I brushed four fingers against his temple. "May Odei give you strength, Janna give you courage, Mikla keep you safe, and Threll take your enemies. You're coming back."

The author has a sequel coming at the end of the year, and I can't wait. Meanwhile, Heartstone is a book that's going on my reread list. It's that good.

Link to Amazon
Posted by AntrimCycle at Saturday, March 03, 2018