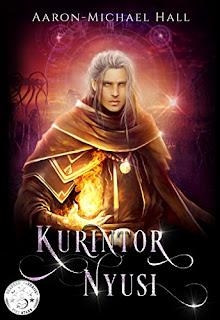 Nurisha San is the adopted daughter of Qaradan San. He has trained her and her best friend Aljosa as warriors, an art she will need in the future. Lately, her birthmark on her wrist has been itching and growing; only a journey to Solluna can give her some of the answers she seeks.
Meanwhile, the remnants of the Kurintor warriors are readying for a battle to defend the Fifth Kingdom. Xavion knows that the mark on his wrist 'twins' him with Nurisha though they have never met. But it is time for them both to develop their mental abilities as well as their warrior skills to face the foes all around them.
This is an engrossing tale perfect for readers of epic fantasy. The story moves around between a numerous cast of interesting characters. Redemption is a question much discussed; can the wicked characters possibly redeem their actions? Or are they doomed to taint the good characters around them? The forces of good and evil are a strong theme throughout the story.
The author is excellent at world-building, and her descriptive talents show here. From Qaradan's blacksmith shop to the taverns of Solluna to the clamor of the Kumasi port, the reader is drawn into a rich and vivid world. The dialogue is particularly striking.
My only quibble is that I would have liked to have seen the story of Goni and Gea moved up nearer to the beginning of the book. It's backstory that would have helped me understand some of the motivations of the characters, but that's just me and it really is probably insignificant to most readers. I can't wait for the next book to see where the story goes next.


Link to Amazon
Posted by AntrimCycle at Wednesday, March 28, 2018