Elle Sloan hasn't seen Luke Hutchins in over a decade since she broke up with him over the phone. 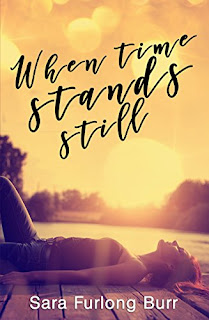 His mother calls her because Luke was in a bad car accident and can't remember anything since the time he and Elle were together in college. She agrees to go see him, hoping to help recover. There are just a few complications: Elle is married, Luke's family and friends still blame her for the breakup, and Elle has her own issues from her background to cope with.
I love second-chance stories, and Ms. Burr does a nice job on this one. The book goes back and forth from the current time to the ten years earlier when Elle and Luke met. It builds the story quite nicely and the pacing is good. Elle and Luke are a good pair though I did think that Elle might have displayed more angst over her background - her mother's alcoholism and the bad boyfriend - than she did; it would have made her eventual reason for the breakup to be more believable.
The secondary characters are fun. Both Mena and Malone deserve their own book as Mena's dialogue is hilarious.
The writing is okay. There's a bit too much passive voice, tense changes, and some YA tropes and over-writing such as: "I know I look like a hot mess - one that has been stomped on by an elephant, run over by a train, and then shit on by life." The story is so good I wish some of this had been addressed, but I didn't find it too distracting.
Anyway, this was a good story, and I enjoyed the read very much. Readers who like second-chance romances will like this one.


Link to Amazon
Posted by AntrimCycle at Sunday, August 12, 2018