Book Review: The Stairs in the Woods by Matthew Cesca 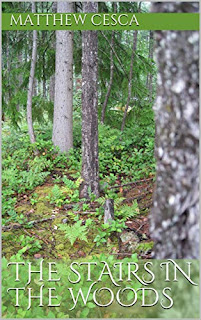 Kaitlynn Jenson has come home to Connecticut to help her dying father. In cleaning out his house, she discovers a secret he's kept from her - a secret that leads her on an adventure through dangers she never expected. She finds a new world and becomes friends with a satyr named Faljon as well as other creatures she never thought existed.
Ever since I read The Lion, The Witch, and The Wardrobe, I've loved portal fantasies. The idea of someone being swept away through a gate or door into another world is fascinating. The author here has done a nice job of worldbuilding in creating Somalie. It is peopled by different creatures from myth and folklore. and he's added good detail about the various peoples and beasts. The world itself is described well from the forests through swamps and into the mountains. It is easy for the reader to become engrossed in this world.
The writing is good with nice pacing and a good flow to the story. The dialogue has the occasional funny moment as Kaitlynn's view of the world collides with how the people of Somalie think things should go. The battle scenes work well with excellent detail on the thrust of spears or the slashing of a sword.
The developing relationship between Kaitlynn and Faljon is interesting. The author is careful not to rush them into anything so it evolves in a natural manner that is entirely believable.
I very much enjoyed my venture into the world of Somalie and I hope to be reading more from this new fantasy author. Mr. Cesca is someone to watch for.


Link to Amazon
Posted by AntrimCycle at Friday, August 17, 2018

Email ThisBlogThis!Share to TwitterShare to FacebookShare to Pinterest
Labels: book reviews, Matthew Cesca, The Stairs in the Woods